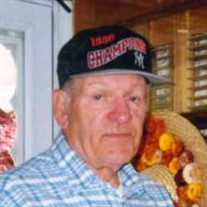 John David Wendlandt, 89 of Old Bridge, New Jersey passed away on Monday, September 13, 2021, at home, surrounded by his loving family. Born Friday, February 12, 1932 in Jersey City, New Jersey, John was one of ten children born to the late Charles and Catherine Wendlandt. Raised in Jersey City, John would join the United States Army during the Korean War. He would earn and receive his Honorable Discharge for faithful service to his country. When he arrived home he would meet the love of his life, Eileen Wermert. The couple would marry, first living in Jersey City, before moving to Old Bridge, 57 years ago, where they would raise their children. John worked as an Operating Engineer with Local 68, specifically working for Merrill Lynch for more than 50 years. John was a founding member of the St. Ambrose Knights of Columbus, and Past Grand Knight. He was also a 4th Degree Sir Knight with the St. Thomas the Apostle Council, as well as a member of the Holy Name Society at the Most Holy Redeemer Church. A proud veteran, John was a member of the Veterans of Foreign Wars in Old Bridge. A caring family man, John will be missed by all those that were blessed to have him in their lives. John was predeceased by his cherished grandson Nicholas LaScala John is survived by his beloved wife of 67 years, Eileen, by his loving children, John and wife Lori, and Lisa LaScala, by his cherished grandchildren, Kristin, Jesse, and Justin Wendlandt, Olivia and Christopher LaScala, and by his adored great grandchildren Addi, Oakley, Silis, and Jet. The family will receive friends from 4:00 PM to 8:00 PM on Thursday, September 16, 2021, at Michael Hegarty & John Vincent Scalia Home for Funerals and Cremation Service, 3377 US Highway 9, Old Bridge, New Jersey. A Funeral Mass will be at 10:30 AM on Friday at St. Ambrose Church located at 81 Throckmorton Lane Old Bridge, New Jersey 08857.

The family of John David Wendlandt created this Life Tributes page to make it easy to share your memories.

Send flowers to the Wendlandt family.