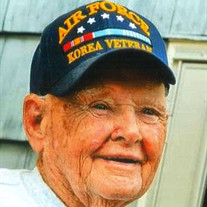 John J. Tooley, 86 of Old Bridge, New Jersey died on Sunday, February 19, 2017, at home, surrounded by his loving family. Born Sunday, May 25, 1930 in the Bronx, New York. John was the son of the late William and Lillian Tooley. John grew up in Yonkers, NY. John was a proud veteran of the U.S. Air Force. He would meet his wife and in the mid 1950's they would move to Old Bridge, where they would raise their family. After 36 years of marriage, John's wife Helen passed away in 1993. John was very active in the community, he volunteered his time coaching baseball at the Old Bridge Little League, and his love of animals would have him volunteering with the Garden State German Sheperd Rescue. John enjoyed spending time on the links playing golf, and also enjoyed making model airplanes. John was a computer data manager with Twin County Grocer in Edison, after retiring he went on to drive school buses for Old Bridge Township. John is survived by his loving children, Patricia Quinn, Susan Chieco and her husband Nick, John Tooley and his wife Toni, and Matthew Tooley and his wife Mary Beth, by his cherished grandchildren, Kelly, John, Samantha, Sean, Nicole, and Renee, by his longtime companion of 22 years Flo Carducci, and by many loving nieces and nephews. The family will receive friends from 2:00 PM to 4:00 PM and 7:00 PM to 9:00 PM on Wednesday, February 22, 2017, at Michael Hegarty & John Vincent Scalia Home For Funerals and Cremation Service, 3377 US Highway 9, Old Bridge, New Jersey. Prayers will be offered at the Funeral Home at 7:30pm. A private cremation will follow. Online condolences may be made to the family at www.HegartyScaliaFuneralHome.com

The family of John J. Tooley created this Life Tributes page to make it easy to share your memories.

Send flowers to the Tooley family.