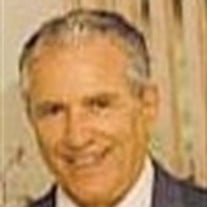 John P. Terrano, 93 of Englishtown, New Jersey passed away on August 31st, 2018, at Jersey Shore Medical Center in Neptune, New Jersey. John was surrounded by his loving family. His wife, Rita was also ill and passed later the same day. Born Thursday, April 30, 1925 in New York, New York, he was the son of the late Salvatore and Pasqua Terrano. John lived in Yonkers New York for 25 years before moving to Englishtown in 1991. He worked as a mail carrier for the US Post Office for 17 years and then worked at Seagram's in the mailroom. He later went on to work for the NYC Transit Authority as a welder before retiring in 1990. In his spare time, John loved watching sports; especially his favorite teams the NY Giants and NY Yankees. He enjoyed playing baseball, ping pong and bocce. He and his wife Rita liked taking trips to Atlantic City and spending time with the beautiful family they built together and were so proud of. John always made sure he spoke with them daily. Surviving are his children Esther Rotella, John Terrano, Maryann Dona, Robert Terrano, Carolann Petnuch and Steven Terrano. His daughter and son in laws Elizabeth Terrano, Lawrence Dona, Diane Terrano, Michael Petnuch and Annie Terrano, His siblings Anthony Terrano, Geraldine Tochet and Salvatore Terrano, 17 Grandchildren and 13 Great Grandchildren. A Mass of Christian Burial will be at 11:00 AM on Wednesday at St. Thomas More Church located at 186 Gordons Corner Rd Manalapan Township, New Jersey 07726. Interment will be in Forest Green Cemetery, Morganville, NJ. The family will receive friends from 2:00 PM to 4:00 PM and 7:00 PM to 9:00 PM on Tuesday, September 4, 2018, at Michael Hegarty & John Vincent Scalia Home For Funerals and Cremation Service, 3377 US Highway 9, Old Bridge, New Jersey. In lieu of flowers, donations in his memory may be made to the Alzheimer's Foundation or the American Heart Association. Online condolences may be made to the family at www.HegartyScaliaFuneralHome.com

The family of John P Terrano, created this Life Tributes page to make it easy to share your memories.

John P. Terrano, 93 of Englishtown, New Jersey passed away on...

Send flowers to the Terrano family.