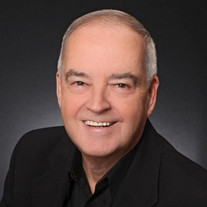 John Sharp, 80 of Old Bridge, New Jersey passed away on Saturday, March 6, 2021, at his home. Born June 26, 1940 in Brooklyn, New York, John was the son of the late John & Ann Sharp. John was raised in Brooklyn. After High School, John would go on to serve in the United States Navy. He would specialize in communications while serving aboard the USS Independence. After 4 years of service John received his Honorable Discharge. John would meet the love of his life in Brooklyn, Barbara Peluso. The couple would eventually marry, living first in Teaneck, NJ, before settling in Old Bridge in 1962. John was a project manager with RCA in Manhattan, working out of their Broadway office. During this time John attended Middlesex College, earning his degree. After retirement, John and Barbara opened ERA Designs for Living real estate office in the Browntown shopping center in Old Bridge. After Barbara passed away in 2002, John continued to run the office, until his retirement in 2017. John was a longtime member of the Middlesex County Realtors Association & NJ Broker's Council where he served as Treasurer for many years. In his spare time John enjoyed hunting and was an avid fisherman. One of John's favorite ways to vacation was on a cruise ship. He was known for having a constant smile, his dry humor & a contagious, positive outlook on life. When asked how he was his response, even in the most difficult of times was, 'I couldn't be better'. John was predeceased by his beloved wife of 40 years, Barbara, and by his sister Patricia Heller & his brother, Robert Sharp. John is survived by his brother in law and sister in law Eugene and Audrey Peluso, by his nephews Anthony Peluso and wife Suzanne, Carmine Peluso and wife Tiffany, and Patrick Peluso and wife Joelle, by his God daughter Danielle Nevader-Poledank, by his God sons, Gene Peluso and wife Beth, Tyler Poledank, and Robert Giudice, by his cousins, Jerry Nevader and Eileen Nevader, and by his longtime loving friends, Margaret and Bob Thuring. A Mass of Christian Burial will take place on Wednesday at 10:30 AM at St. Ambrose Church, 83 Throckmorton Lane, Old Bridge, NJ. Interment to follow at Chestnut Hill Cemetery. A gathering of family and friends will take place on Tuesday between the hours of 5:00 PM and 8:00 PM at the Michael Hegarty and John Vincent Scalia Home for Funerals and Cremation Services. In lieu of flowers donations are requested to the Tunnel to Towers Foundation in John's Memory. The link is provided below. https://dogood.t2t.org/give/320847/#!/donation/checkout

John Sharp, 80 of Old Bridge, New Jersey passed away on Saturday, March 6, 2021, at his home. Born June 26, 1940 in Brooklyn, New York, John was the son of the late John & Ann Sharp. John was raised in Brooklyn. After High School, John would... View Obituary & Service Information

The family of John Sharp created this Life Tributes page to make it easy to share your memories.

Send flowers to the Sharp family.