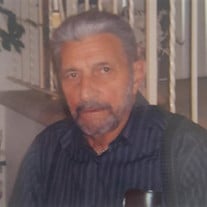 John Schimmenti, 85 a longtime Old Bridge, NJ resident passed away after a long battle with cancer. Born Monday, November 28, 1932 in Brooklyn, New York, he was the son of the late Adolf and Antoinette Schimmenti. John was raised in Brooklyn, After High School John would go on to join the United States Army. He served his country honorably as an Army medic, stationed in Germany. Upon returning from Germany John would eventually meet the love of his life, Joan Faiella. The two would marry and begin their life together. Soon after marrying and beginning their family they would move to Old Bridge, and that is where they would remain. John worked for the NY & NJ Port Authority as a sign mechanic, he also was self employed working as a carpenter. John was very active in his sons lives. He enjoyed fishing with them in different fresh water fishing holes, throughout the area. John was very active in the Old Bridge Little League, he coached many teams, including All Star teams. John loved taking trips with his beloved wife Joan to Atlantic City He was an incredible husband, father, grandfather, and friend, and will be missed by all those who loved him. John is survived by his beloved wife of 59 years, Joan, by his loving children, Robert and his wife Theresa, John and his wife Victoria, and Joseph and his wife Rosemary, and by his cherished grandchildren, Bobby, Michael, Tony, Samantha, Jesse, Sabrina, and Victoria. A gathering of family and friends will take place on Saturday June 2, 2018 between the hours of 1:00 PM and 5:00 PM, at the Michael Hegarty and John Vincent Scalia Home for Funerals and Cremation Service, 3377 US Highway 9 Old Bridge, NJ 08857. A Funeral Service will be held in the Funeral Home at 3:30 PM. Online condolences may be made to the family at www.HegartyScaliaFuneralHome.com

John Schimmenti, 85 a longtime Old Bridge, NJ resident passed away after a long battle with cancer. Born Monday, November 28, 1932 in Brooklyn, New York, he was the son of the late Adolf and Antoinette Schimmenti. John was raised in Brooklyn,... View Obituary & Service Information

The family of John Schimmenti created this Life Tributes page to make it easy to share your memories.

Send flowers to the Schimmenti family.