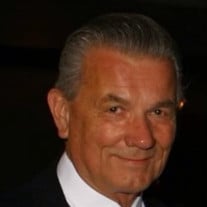 John Jadus, 90 of Branchville, New Jersey passed away Sunday May 29, 2022, at Bentley Assisted Living in Branchville. Born Tuesday, September 29 1931 in Newark, New Jersey. John was the son of the late Julius 'Jack' and Stephanie 'Stella' Jadus. Raised in Newark,New Jersey after High School John served his country in the United States Navy during the Korean War.He was honorably discharged and he returned home to Newark. There he met the love of his life Barbara 'Nancy' Parkinson and they were soon married. They moved to Old Bridge , New Jersey to raise their family and lived there for more than 50 years. John drove a truck for Associated Transport for many years He was a member of the Teamsters Locals 478 and 560. After retiring from trucking he went on to 'The best job he ever had' driving a school bus in Old Bridge township. John was a family man and would do anything for his children and grandchildren. He enjoyed family barbecues where he was lovingly referred to as the grill master His trademark line was always 'work it with the knife' He enjoyed traveling to Florida with his wife where they spent a lot of their time at Disney. John was predeceased by his beloved wife, who passed in 2019. John is survived by his loving sons David and his wife Angela and Paul and his wife Christine.By his caring sisters Laura Pezik and Irene Mitchell.By his cherished grandchildren David and his fiance Danielle, Danielle Jones and her husband Nathan, Rachel, Emily and her husband Norman, and Kellie. By his cherished great grandchildren Andrew, Christina, Skylar, Harper and Olive. The family will receive friends from 3:00 pm to 7:00 pm on Thursday, June 2, 2022, at Michael Hegarty & John Vincent Scalia Home for Funerals and Cremation Service 3377 US Highway 9, Old Bridge ,New Jersey A funeral service will be at 10:00 AM on Friday at Most Holy Redeemer Church located at 133 Amboy Road Matawan, New Jersey 07747 Interment will be in St. Gertrude's Cemetery, Colonia, New Jersey. In lieu of flowers the family requests that donations in John's memory are made to the Alzheimer's Association

The family of John Jadus created this Life Tributes page to make it easy to share your memories.

Send flowers to the Jadus family.