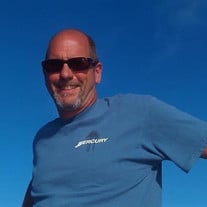 John Foster, 62 of Old Bridge, New Jersey passed away on Saturday, February 19, 2022, at his home in Old Bridge. Born October 21, 1959, in Canandaigua, New York, John was the son of the late Larry and Jackie Foster. John was raised in Victor, NY. He graduated from Victor High School where he was a member of the school swim team. John attended S.U.N.Y. Potsdam and was a fraternity brother at Psi Phi Delta. John was active in school government at Potsdam where a losing student government political run would give him the greatest win of his life. John met the love of his life, Kelly Ellis, and the one-time political rivals became soulmates. After graduating from Potsdam, the couple married, living briefly on Cape Cod, before moving to New Jersey in 1986 and settling in Old Bridge in 1998. Throughout his life John was active in the Boy Scouts, spending his summers on the aquatics staff at Camp Babcock-Hovey on Seneca Lake, NY. When he had a son John became the Cub Master for Pack 129 and then the Boy Scouts Commissioner for Troop 219 in Old Bridge. Active in his children's lives, John was also a parent volunteer with the Old Bridge High School Marching Knights and was a member of the pit crew. Professionally John was the Aquatics Director of the Old Bridge YMCA, mentoring many students in their first jobs, volunteering and supporting the Old Bridge HS swim team, and making many meaningful and lasting friendships. John loved being out on the water, boating. He especially loved summers on Caroga Lake in the Adirondack Mountains of New York State boating, wakeboarding, and tubing with family. He was always tinkering with projects around the house and helping friends with anything they needed. John's playlist was filled with Jimmy Buffet, the Grateful Dead and outlaw country. He will be deeply missed by all those that are blessed to have loved him. John is survived by his life-partner and wife of 35 years, Kelly, by his loving children, Alexander and Caitlin, by his caring siblings, Jody Foster, Carol Ungerer (Rudy), Laura Hainsworth (Mark), and Amy Collins (Bob), by his dear in-laws Frank Lewandusky and Joanne Malecki, Debbie Rensing, Mary and Paul Zordan and Noreen Ellis.. Uncle John made a lasting impact on his many loving nieces, nephews, great-nieces, and great-nephews. A celebration of John's life will take place from 12:00 PM to 5:00 PM on Saturday, February 26, 2022, at Michael Hegarty & John Vincent Scalia Home For Funerals and Cremation Service, 3377 US Highway 9, Old Bridge, New Jersey. In lieu of flowers please donate to the John Foster YMCA Scholarship at Old Bridge High School. Send Checks payable to Old Bridge High School c/o Dr. Vincent Sasso 4209 Route 516 Matawan, NJ 07747

John Foster, 62 of Old Bridge, New Jersey passed away on Saturday, February 19, 2022, at his home in Old Bridge. Born October 21, 1959, in Canandaigua, New York, John was the son of the late Larry and Jackie Foster. John was raised in Victor,... View Obituary & Service Information

The family of John Foster created this Life Tributes page to make it easy to share your memories.