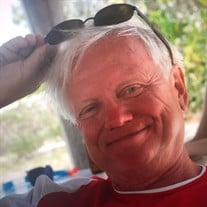 John Henry Dahlquist, 76 of Manalapan, New Jersey, passed away from complications due to cancer on Saturday, April 25, 2020. Born Wednesday, May 5, 1943, in Staten Island, New York, John was the eldest son of the late John and Grace Dahlquist. John grew up across the street from a schoolyard where he played many sports including softball and basketball. He attended Port Richmond High School and was the Student Body President of the graduating class of 1961. He played on the school basketball team throughout his time at Port Richmond and was a starting member of the championship team of 1961. The team qualified to play at New York’s Madison Square Garden. Following high school, John's college years were spent at North Park University in Chicago and Wagner College on Staten Island. It was at Wagner College that he met Lynne Maynard of Staten Island and the two were married in 1965. John began his business career at Sears and in the mid-1970s became a business owner of a retail store in Freehold. This evolved into a sporting goods business, which he owned for over forty years. His involvement with the local businesses and community combined with his love for sports and his daughters led him to begin his coaching career in youth soccer. John coached girls soccer during a time when soccer was still in its infancy in the US. His Manalapan Girls Traveling Teams were known as highly talented soccer teams, winning the NJ State Cup Championships in 1984, 1985, and 1986. Later, John co-founded the Battle of Monmouth Youth Soccer Club and went from coaching soccer to refereeing soccer, which he continued to do throughout his life, with over 5000 games in the books! John enjoyed golf, hockey (NY Rangers), baseball (NY Yankees), and politics. He listened to classical music often and Mozart was his favorite. He loved history and was very competitive; he mostly enjoyed playing games with his family, especially ping pong, trivial pursuit, and anything else where he could win. He had the most beautiful blue eyes you ever did see and was convinced he was the spitting image of a young John Voight. His quick wit and dry humor always made everyone around him feel at ease and laugh. He also enjoyed traveling with his loving wife of 53 years, playing bridge and pinochle with friends and bowling. Even when he was in spirited debates with his family, he was always very proud that he had four strong daughters who spoke their minds. Above all, what brought John the most joy was his family, followed closely by the 1994 Stanley Cup. John is predeceased by his wife, Lynne. He is survived by his loving daughters, Jennifer Schonher and her husband Tom, Ursula Laskodi and her husband John, Kiersten Dahlquist and her husband Derek McAuley, and Janelle Littig and her husband Adam, by his caring brother, Roy Dahlquist and his wife Peggy, by his cherished grandchildren, Erika, Colin, Caitlyn, Jack, Matthew, Callee, Cassidy, Connor, Clayton, Devin, Cambelle, Lily, Cayden, Ryan, Nicklas, and Tyler, and by many nieces and nephews. John will be missed by all those that were blessed to have had him in their lives. In lieu of flowers, donations can be made in John’s name to the US Soccer Foundation or the New York YMCA. Due to current COVID-19 restrictions, a small family burial service will be held on May 21st, 2020 at Moravian Cemetery, Staten Island, NY. A celebration of John’s life will be held at a later date. Online condolences may be made to the family at www.HegartyScaliaFuneralHome.com

John Henry Dahlquist, 76 of Manalapan, New Jersey, passed away from complications due to cancer on Saturday, April 25, 2020. Born Wednesday, May 5, 1943, in Staten Island, New York, John was the eldest son of the late John and Grace Dahlquist.... View Obituary & Service Information

The family of John Henry Dahlquist created this Life Tributes page to make it easy to share your memories.

Send flowers to the Dahlquist family.