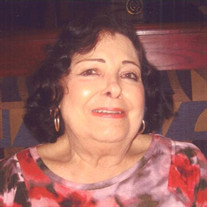 Joan Partridge, 83 of Manalapan, New Jersey died on Monday, September 4, 2017, at Jersey Shore University Medical Center in Neptune, New Jersey. Born Tuesday, January 15, 1934 in New York, New York Joan was the daughter of the late Harry and Anna Hayes. Joan was a graduate of Valley Stream Central High School, that would be where she met the love of her life Howard. They would go on to marry, raise a family and spend the next 66 years together. Joan and Howard would live in different towns throughout New York before moving to New Jersey. They would live in Wickatunk, NJ before settling in Old Bridge where they resided for 38 years. Recently Joan and Howard moved to Manalapan to be closer to their daughter. Family was everything to Joan, she enjoyed spending time with her children and grandchildren. Joan enjoyed gardening and had a love for animals. She will be deeply missed by all of those that were fortunate to have had her in their lives. Joan is survived by her beloved husband Howard, her adoring children Linda Caporusso and her husband Gus, Donna Guglielmo and her husband Steven, Joanne Reilly, Michael R. and his companion Cindy McCarthy, Debra Sheraton and her husband John, Tricia Neuman and her husband Christopher, her cherished grandchildren, Christopher, Lynda, Kevin, Michele, Jennifer, Gina, Nicole, John, Stephanie, Melisa, Samantha, Kelsie, Mathew, Maxwell, Sierra, Dakota, and Cole, by her adoring great grandchildren, Trevor, Kayla, Emily, Brianna, Shealyn, Karina, Jordan, Christopher Jr., Mylie, Jacob, Jaxson, Keira, Josh, Ryder, Mathew, Luke, Bentley, and Liam, and by her caring brother Harry Hayes Jr.. Joan is pre deceased by her grandsons Michael Jr. and Wesley, and her great grandchild Angel. A Funeral service will be at 5:15 PM on Saturday at Michael Hegarty & John Vincent Scalia Home For Funerals and Cremation Service located at 3377 US Highway 9 Old Bridge, New Jersey 08857. The family will receive friends from 2:00 PM to 6:00 PM on Saturday, September 9, 2017, at Michael Hegarty & John Vincent Scalia Home For Funerals and Cremation Service, 3377 US Highway 9, Old Bridge, New Jersey. Online condolences may be made to the family at www.HegartyScaliaFuneralHome.com

The family of Joan Partridge created this Life Tributes page to make it easy to share your memories.

Send flowers to the Partridge family.