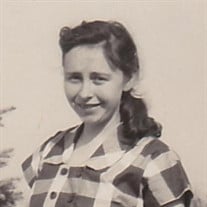 Joan Cless-Kabara, 87 of Old Bridge, New Jersey passed away on Friday, April 17, 2020, at her home. Born Tuesday, August 23, 1932 in Newark, New Jersey, Joan was the daughter of the late William and Mary Leonard. Raised in Newark, Joan attended St. Vincent Academy and would move to Old Bridge at the age of 18. Joan would marry and raise her children in Old Bridge. Joan worked as a crossing guard at the Voorhees School for many years, it was something she loved doing, and was well known by all those she saw everyday. Joan had a great love for animals and was a strong supporter of the ASPCA and Friends of Animals, and was especially involved in efforts to save dolphins and whales. She enjoyed spending time with her own dog, and loved going for walks, nature, and her favorite television shows. Joan also traveled extensively through Ireland with her sisters and nieces. She was a loving, mother and grandmother and will be missed by all those that loved her. Joan was predeceased by her loving son, Robert Cless. Robert was the first archaeologist hired by the Connecticut Department of Transportation for cultural resource review, and became a supervisor. He developed electronic versions of the Connecticut state archaeological site files and maps, as well as Geographic Information System approaches to assist the CDOT office and the State Historic Preservation Office in management of the files and to bring them into the 21st century. Joan was also predeceased by her first husband William Cless, and second husband Chester Kabara. She was the last survivor amongst 9 siblings. Her brothers were Joseph Leonard, Tom Leonard, William Leonard, and Harry Leonard. Joan's sisters were Laura Geiss, Marian Redman, Alice Weining, and Bernice Kelly. Joan is survived by her loving daughter, Martha Gillar, by her cherished grandchildren, Laurie Colasanti, Christine McLaughlin and her husband Matthew, and Keith Gillar, and by her adoring great grandchildren, Desmond, Cadence, Adelynn, and Nova. She is also survived by many nieces and nephews. Funeral services were private. Online condolences may be made to the family at www.HegartyScaliaFuneralHome.com

The family of Joan Cless-Kabara created this Life Tributes page to make it easy to share your memories.

Joan Cless-Kabara, 87 of Old Bridge, New Jersey passed away on...

Send flowers to the Cless-Kabara family.