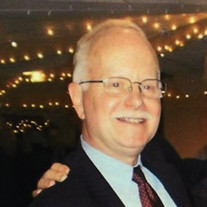 James V. Samuelson, 66, of Old Bridge, NJ passed away peacefully on Monday, November 21, 2016 at Centra State Medical Center in Freehold after a courageous fight with a hard fought illness. Jim was born in Plainfield, NJ on November 3, 1950 to Ruth (Pearson) Samuelson and the late A. Vincent Samuelson. He grew up in Fanwood and graduated from the Scotch Plains Fanwood High School (SPFHS) in 1969. He lived in Elizabeth while attending Union County College and received an Associate of Arts Degree in 1972 and then attended Kean University where he graduated with a Bachelor of Arts Degree in English/Communications in 1976. He later moved to Old Bridge where he resided for nearly 40 years. Jim was a dedicated and recognized railroader with a career spanning 41 years. He got his start working as a Control Tower Operator and then as Assistant Chief Train Dispatcher for the Central Railroad of NJ. This was followed by the position of Movement Director / Train Dispatcher at Conrail. Jim played a critical part in the formation and start-up of NJ Transit with the transfer of Conrail’s commuter operations over to NJ Transit, serving as Chief Train Dispatcher for the NJ Commuter Region. His career at NJ Transit would offer him many roles, first as Chief Train Dispatcher, then as Trainmaster Newark Division, Trainmaster – Capital Projects, Manager - Operating Rules, Director System Operations, Line Superintendent NJCL / ACL, General Superintendent Newark Division, Deputy General Manager Transportation, General Superintendent System Operations, General Superintendent New York Penn Station and finally retiring as Deputy General Manager Safety and Training in November 2010. He often said “every day on a railroad is an adventure.” He was also a very active member of the Cross of Glory Lutheran Church in Aberdeen where he served as the Congregation Council President on the Church Council for many years. Jim also volunteered his time as Chairman of both the Property and Finance Committees and was a member of the Nursery School’s Board of Directors. He also enjoyed assisting his son Jeremy put together the church’s Annual Christmas Tree Lighting & Carol Sing every December. Jim loved his church dearly and enjoyed tending to its beauty. Surviving are his loving wife Linda “Annie” Samuelson of 32 years; two children: his daughter Lindsey A. Samuelson and her partner Erin Gerow of Bloomfield, NJ, his son Jeremy V. Samuelson and his girlfriend Taryn Leary of Old Bridge; his mother: Ruth P. Samuelson of Woodinville, Washington; two brothers: John L. Samuelson and his wife Linda of Colorado Springs, Colorado, Jeffrey L. Samuelson and his wife Marti of Woodinville, Washington; one sister: Janet A. Achilich and her husband Steven of Baiting Hollow, New York; as well as numerous nieces, nephews, and extended family and friends who will miss him dearly. A Memorial Service celebrating his life will be held at 1:00 PM, Saturday, December 3, 2016 at Cross of Glory Lutheran Church, 95 Cambridge Drive in Aberdeen, NJ 07747. In lieu of flowers, the family has requested that Memorial Donations be made in his name to the Cross of Glory Lutheran Church Jim Samuelson Memorial Fund.

The family of James V. Samuelson created this Life Tributes page to make it easy to share your memories.

Send flowers to the Samuelson family.