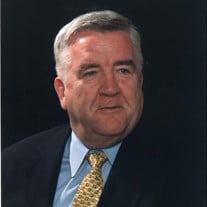 James Thomas Murphy, 80 Native Staten Islander, Attorney at Law James (Jim) passed away peacefully on Monday April 27, 2020 after complication from surgery. James was born on March 7, 1940. He was raised in Rosebank, the youngest of 3 children. He moved to Fort Wadsworth after marriage, and later resided in Old Bridge Township. James was a graduate of New Dorp High School, Pace University and Brooklyn Law School. He met the love of his life Teresa Hegarty at Chase Manhattan Bank in NYC, where they both worked for a short period of time. James was happily married to Teresa for 57 years. His career spanned from Army veteran, NYC policeman, Assistant District Attorney, to private law practice. James was a member of the Bar Association of New York & New Jersey. James was still practicing law up until his death. James was beloved by all that knew him. He was a man of strong faith and moral character. James was a member of St. Vincent de Paul Society, and the Friendly Sons of St. Patrick in Manhattan. James was very active in church choirs and local theater. We remember him acting in local productions of Damn Yankees and Oliver. He sang and lectored many years at St. Mary's Catholic Church in Rosebank, and in later years at Holy Redeemer in Old Bridge Township. He will be remembered for his beautiful tenor voice. James loved reading, music, gardening and his family. He will be greatly missed by his wife, Teresa, his daughter, Laura, sons, Michael, Sean, Jimmy and their families. He also leaves behind 7 beautiful grandchildren, and his numerous nieces and nephews. A Memorial Mass will be held at a later date.

James Thomas Murphy, 80 Native Staten Islander, Attorney at Law James (Jim) passed away peacefully on Monday April 27, 2020 after complication from surgery. James was born on March 7, 1940. He was raised in Rosebank, the youngest of 3 children.... View Obituary & Service Information

The family of James Thomas Murphy created this Life Tributes page to make it easy to share your memories.

Send flowers to the Murphy family.