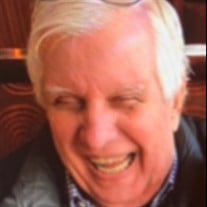 Jim's family has set up this donation page in the name of their father to Sayre Woods South LL. Baseball was a huge part of Jim's life and they would like to give back to the league Jim gave so much of his time and dedication to... Thanks in advance for your contribution to this cause that means so much to the family, the league and the kids of Old Bridge. https://www.gofundme.com/f/brians-fund-for-charity?utm_medium=email&utm_source=customer&utm_campaign=p_na+share-sheet&pc_code=em_db_co2876_v1&rcid=1e0aadad3215434e9817f3ab51f30bab James Kiernan, 81 of Old Bridge, New Jersey passed away on Thursday, December 10, 2020, at Columbia Presbyterian Hospital in New York. Born in January 1939 in the Bronx, he was the son of the late Michael and Anna Kiernan. Known for his legendary laugh, James was raised in the Bronx and was one of the Archer Boys. He graduated from Cardinal Hayes High School before attending Pace University. James was a proud Veteran of the United States Army, he was stationed in Germany during his service. James would marry his wife, Kathleen Hunt in 1961. The couple would start their family in the Bronx before settling in Old Bridge in 1967. James was an active member of the Old Bridge Community. Volunteering his time to the Sayrewoods South Little League, as President and a manager, coach, and umpire. He was also a devout catholic and parishioner at St. Ambrose Church, where he was past president of the Parish Council and also an Eucharistic minister. James worked for MetLife for nearly 4 decades, before working at the Census Bureau during his retirement. James was a huge NY Yankees fan, and loved baseball. James was also a member of the Indian Guides. He really enjoyed life, family, fun, a good laugh, Yankee baseball and trips to Atlantic City. James was predeceased by his sister Jean Lynch, and cousin George Gerety. James is survived by his wife of 58 years, Kathleen, by his children, Ellen Sonders and husband Mark, Michael Kiernan and wife Pamela, and Stephen Kiernan, by his brother Donald Kiernan, and by his grandchildren, Juliette and Thomas Kiernan, and Kyle, Olivia, and Ryan Sonders. The family is planning a Covid-19 safe memorial funeral procession. Guests are welcome to join the family on Saturday December 19th at 11AM at Michael Hegarty & John Vincent Scalia Home for Funerals and Cremation Services at 3377 US Highway 9, Old Bridge New Jersey. Guests will stay in their cars and follow along to visit some special places in Old Bridge with a concluding ceremony at Forest Green Park cemetery located at 535 Texas Road Morganville, New Jersey 07751. Unfortunately, due to the pandemic, there will not be a reception following the ceremonies. "To all the days here and after, may they be filled with fond memories, happiness and laughter"

Jim's family has set up this donation page in the name of their father to Sayre Woods South LL. Baseball was a huge part of Jim's life and they would like to give back to the league Jim gave so much of his time and dedication to... Thanks in... View Obituary & Service Information

Jim&#39;s family has set up this donation page in the name of their...