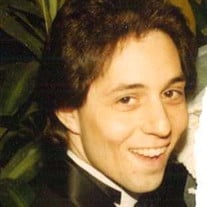 Anyone who knew Jimmy Jardinella knew he was passionate about 4 things: family, friends, cars, and music. Born November 1, 1955 in Brooklyn, New York, to Fred and Vicky Jardinella, his brothers asked they name him James after the good guy in the westerns. Jimmy's love of cars was evident early on when he would zip about the neighborhood in his Golden Hawk pedal car. He was tearing cars apart in the driveway in elementary school, just to see how they worked, and as he got older he turned his passion into a career. An accomplished auto tech, Jimmy worked at the Brooklyn based Picture Cars supplying all things automotive to film and tv productions around the country. As SAG member, he even managed to sneak into a few shoots, if you look closely you may spot him in a Law and Order episode or in the movie the Prince of Tides. For the past few years Jimmy worked helping curate a private Ferrari collection based in Manhattan. Jimmy's true automotive passion was drag racing. His older brother gave him a 68 Chevy Nova that lit the fire. Over the years he and a tight knit group of friends would work on each other's cars and race as much as they could. He moved to Old Bridge, NJ from his beloved Brooklyn, to be closer to his home track in Englishtown. He was in the process of completing his own dragster when he became too sick to work, true to form his friends have banded together to finish the build. Jimmy's interest in music began early when he would hang out in the basement listening to his older brother's band. By 11, he won a contest at a resort playing Gene Krupa's drums. Jimmy played all genres of music, from Rock to Jazz to the Blues. Throughout the years Jimmy was the drummer in a number of bands including Fresh Air and Speed Limit. To the end he was still jamming with friends from that basement in Brooklyn. James T Jardinella, of Old Bridge, New Jersey passed away Wednesday, June 19, 2019, surrounded by his many friends and family at Haven Hospice in Edison, New Jersey. We doubt that the hospice has ever seen so many friends and family. James is survived by his brother William Jardinella and his wife Joan and their children James and Michael, his brother Robert Jardinella and his wife Gloria and their daughter Kira, great nieces and nephews, Elizabeth, Hannah, Charlie, and James 'Jay', and girlfriend Joanne Zion. The family will receive friends from 2:00 PM to 4:00 PM and 6:00 PM to 9:00 PM on Friday, June 21, 2019, at Michael Hegarty & John Vincent Scalia Home For Funerals and Cremation Service, 3377 US Highway 9, Old Bridge, New Jersey. Online condolences may be made to the family at www.HegartyScaliaFuneralHome.com

Anyone who knew Jimmy Jardinella knew he was passionate about 4 things: family, friends, cars, and music. Born November 1, 1955 in Brooklyn, New York, to Fred and Vicky Jardinella, his brothers asked they name him James after the good guy in... View Obituary & Service Information

The family of James T Jardinella created this Life Tributes page to make it easy to share your memories.

Anyone who knew Jimmy Jardinella knew he was passionate about...

Send flowers to the Jardinella family.