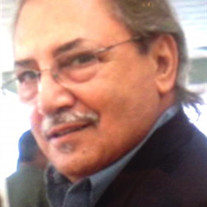 James Greco, 78 of Old Bridge, New Jersey passed on Monday, June 26, 2017, at Clara Maass Medical Center in Belleville, New Jersey. Born January 12, 1939 in Brooklyn, New York, he was the son of the late Carmine and Angelina Greco. James was raised in Brooklyn and it is there where he would meet his wife, Mary. Growing up James found an interest WW II and enjoyed watching many war movies. He would perform in different Doo Wop bands, he was a member of the Concepts and also a member of the Dardenelles. James and Mary would marry in 1960 and start their family. In 1967 they moved to Old Bridge, NJ. James was a Jeweler and worked for many years in the Diamond District of New York City, he spent more than 30 of those years working for Feature Ring. James enjoyed riding his motorcycle with his brother Carmine. He also enjoyed watching Nascar, but more than anything James loved being with his family. James is survived by his beloved wife of 57 years Mary, by his loving daughter Diana Mateyka and her husband John, by his cherished grandchildren Nicole Getz and her husband Keith, John Mateyka, and Dylan Mateyka, by his adoring great grandson Rocco Dominick James Getz, by his caring brother Carmine Greco Jr, and by his sister in law Christine Marsella and brother in law Anthony Picarelli. James was pre deceased in 1998 by his beloved daughter Gina Greco and he was also pre deceased by his brother in law Joseph Picarelli. A Mass of Christian Burial will be at 10:15 AM on Friday at St. Thomas the Apostle. Interment will be in Chestnut Hill Cemetery, East Brunswick, NJ. The family will receive friends from 4:00 PM to 8:00 PM on Thursday, June 29, 2017, at Michael Hegarty & John Vincent Scalia Home For Funerals and Cremation Service, 3377 US Highway 9, Old Bridge, New Jersey. In lieu of flowers donations in James' memory can be made to St. Jude Children's Research Hospital at www.stjude.org/give or to The Wounded Warrior Project at www.woundedwarriorproject.org/donate Online condolences may be made to the family at www.HegartyScaliaFuneralHome.com

The family of James Greco created this Life Tributes page to make it easy to share your memories.

Send flowers to the Greco family.