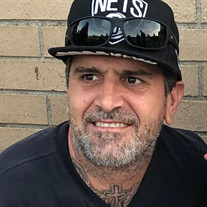 James Cirello, III, 44 of Old Bridge, New Jersey passed on Wednesday, September 5, 2018 Born Sunday, March 10, 1974 in Brooklyn, New York to Maria Cirello and James Cirello, II. The family moved to Staten Island were James spent much of his childhood before moving to Old Bridge, New Jersey with his family when he was 13. James was a graduate of Madison Central High School, and an active member of New York Carpenters Union 1556 as a Dock Builder. 12 years ago he would meet the love of his life Sharon and they would marry 7 years later and have a beautiful daughter Lola Maria, who they cherished. James enjoyed music and dance and his favorite team the Dallas Cowboys. More than anything James enjoyed spending time with his family. He will be missed by all who loved him. James is survived by his beloved wife Sharon, cherished daughter Lola Maria, his loving parents Maria Cirello and James Cirello, II, his caring siblings Alicia O'Neal, Noelle Cirello - Dziedzic and her husband Chris, Stephen Cirello and his wife Kelly and many loving nieces and nephews, William O'Neal, Alexis Saffold, Raiden Verela, Erin and Matthew Lauer. James will also be remembered by all his loving Aunts, Uncles and cousins. James is predeceased by his brother in law Billy O'Neal who passed in 2002. In Lieu of flowers the family has requested donations be made to Sharon and Lola Cirello. A Funeral service will be at 11:00 AM on Monday at Michael Hegarty & John Vincent Scalia Home For Funerals and Cremation Service located at 3377 US Highway 9 Old Bridge, New Jersey 08857. The family will receive friends from 4:00 PM to 8:00 PM on Sunday, September 9, 2018, at Michael Hegarty & John Vincent Scalia Home For Funerals and Cremation Service, 3377 US Highway 9, Old Bridge, New Jersey. Online condolences may be made to the family at www.HegartyScaliaFuneralHome.com

The family of Mr. James Cirello, III created this Life Tributes page to make it easy to share your memories.

Send flowers to the Cirello family.