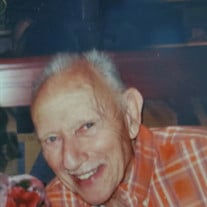 Howard Donald Partridge, 88 of Manalapan, New Jersey passed away on Monday, May 3, 2021, at home, surrounded by loving family. Born Tuesday, October 25, 1932 in New York, New York, Howard was the son of the late Alfred and Ericka Partridge. Raised in NY, Howard and his family would move to Long Island. He would go on to attend Valley Stream Central High School. It was there he would meet and marry the love of his life, Joan. The couple would marry and spend the next 66 years together, until Joan's passing in 2017. During these years they would raise their children on Long Island before moving to Wickatunk. Howard and Joan would eventually settle in Old Bridge, where they lived for 38 years. It was 11 years ago that they would move to Manalapan, to be closer to family. Howard was owner operator of Siedak Enterprises, a trucking company based in North Brunswick. He had a love for animals, especially taking care of his horses, and his Doberman dogs throughout the years. He will be missed by all those that loved him. Howard was predeceased by his beloved wife, Joan who passed away in 2017, and by his grandsons Michael Jr. and Wesley, and his great grandchild Angel. Howard is survived by his adoring children Linda Caporusso and her husband Gus, Donna Guglielmo and her husband Steven, Joanne Reilly, Michael R. and his wife Cindy, Debra Sheraton and her husband John, Tricia Neuman and her husband Christopher, his cherished grandchildren, Christopher, Lynda, Kevin, Michele, Jennifer, Gina, Nicole, John, Stephanie, Melisa, Samantha, Kelsie, Mathew, Maxwell, Sierra, Dakota, and Cole, by his adoring great grandchildren, Trevor, Kayla, Emily, Brianna, Shealyn, Karina, Jordan, Christopher Jr., Mylie, Jacob, Jaxson, Keira, Josh, Ryder, Mathew, Luke, Bentley, Liam and Jack, and by his great great grandchildren, Riley and Frankie. Funeral services will be private. Online condolences may be made to the family at www.HegartyScaliaFuneralHome.com

The family of Howard Donald Partridge created this Life Tributes page to make it easy to share your memories.

Send flowers to the Partridge family.