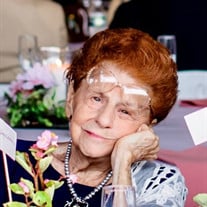 Helen Smaldone, 99 of Monroe Township, New Jersey passed away on Friday, January 21, 2022, at home surrounded by her loving family. Born Friday, June 30, 1922 in Brooklyn, New York, Helen was the daughter of the late Vincenzo and Vincenza Imbriani. Helen was born in the Fort Greene section of Brooklyn. She was a graduate of Girls Commercial High School and later received a diploma in secretarial studies from Drake Business School. In 1942 she began working as a clerk/typist at the former Mergenthaler Linotype in Brooklyn and would later have a 27 year career as a transfer clerk in the exchange stocks and bonds department at Chase Manhattan Bank. She retired in 1987. In 1943, after a four year courtship she married the love of her life, John Smaldone, who was serving in the US Army. Considered a war bride, Helen traveled to Fayetteville, NC to be with her husband. After the war, the couple returned to Brooklyn to raise their daughter, Joanne. In 1973 they moved to Regis Drive in the Graniteville section of Staten Island. After her husband passed, Helen settled in Monroe Township, NJ to the community of Stonebridge with her daughter and son-in-law. Helen loved being around people from the front stoop in Brooklyn to the front yards on Regis Drive. She and John enjoyed meeting their friends every day at the Staten Island Mall for breakfast. Later in life, living in New Jersey, Helen enjoyed the parties and events at Stonebridge. She was also known as the most famous grandma in Old Bridge where she became everyone's 'GRAM'. She loved going to PTA meetings, book club and music bingo. Helen lit up the room wherever she went. The people that Helen loved being around the most were her family. They were her life and they were all blessed to have her in theirs. Helen was predeceased by her beloved husband John, who passed away in 2008, by her parents, Vincenzo and Vincenza, and by her siblings, Viola, Anthony, Patsy, and Carmine. Helen is survived by her loving daughter Joanne DeVito and her husband Raymond, by her granddaughters, Kim Molinaro-Kenavan and her husband Shawn, and Michele Milone and her husband Marcello, and by her great grandchildren, Nicholas Zolfo, Ava Zolfo, Marcello Milone, Emilie Milone, Juliette Milone, and Shawn Haskins. The family will receive friends from 2:00 PM to 5:00 PM and 7:00 PM to 10:00 PM on Tuesday, January 25, 2022, at Michael Hegarty & John Vincent Scalia Home For Funerals and Cremation Service, 3377 US Highway 9, Old Bridge, New Jersey. A Funeral Mass will be at 11:00 AM on Wednesday at St. Teresa Church located at 1634 Victory Blvd Staten Island, New York 10314. Interment will be in St. Peter's Cemetery, Staten Island, NY.

The family of Helen Smaldone created this Life Tributes page to make it easy to share your memories.

Send flowers to the Smaldone family.