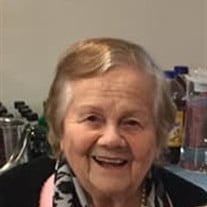 Gloria Martines, age 90, originally of Brooklyn, NY, most recently of Lincroft, NJ, passed away, surrounded by the love of her family, on Wednesday July 17, 2019. Gloria was born July 7, 1929 in Brooklyn, NY. She is the daughter of the late Carmine and the late Raffaela (Tammaro) Mossorofo. Gloria was raised in Brooklyn, NY. She would meet the love of her life, Benjamin, and the two would marry. They would raise their family in Brooklyn. They were married for 57 years, before Benjamin passed away in 2007. Gloria worked with the New York City Board of Education. First working in the school's kitchen, and then being promoted to School Secretary, working at P.S. 248 in Brooklyn. Gloria was a devout catholic. She was a member of the Rosarian Society, and also an active parishioner of her church, St. Mark's in Sheepshead Bay. Gloria always supported Benjamin coaching baseball teams, were a part of bowling leagues together and many other community activities. Gloria enjoyed all games of chance, when family gatherings took place everyone knew to just give their money to the Left Right Center Champion. She enjoyed trips to Atlantic City, playing the slots, and also times she went crabbing with her family. She will be missed everyday, but especially on Sunday's when she would prepare her Sunday sauce and macaroni and on Christmas Eve for her Feast of the Seven Fishes. Family was her life, and everyone that knew and loved her were blessed to have had her in their lives. She will be terribly missed, but the memories she shared with all, will live on forever. Gloria was predeceased by her beloved husband of 57 years, Benjamin Martino. Gloria is the adored Mother to Frank Martino, Michael Martino (Ann), Robert Martino (Lorraine), Benjamin Martino, Jr. (Diana). Cherished Grandmother to Caroline, Michael, Joanna, Jill, Daniel, Janine, Christopher, Matthew, Andrea and Maria. Great Grandmother to Graceann, Audrey, Madison, Benny, Carter and Cameron. A gathering of family and friends will take place on Friday July 19, 2019 from 1:00 to 4:00 and 6:00 to 9:00 PM at the Michael Hegarty & John Vincent Scalia Funeral Home, 3377 US Highway 9, Old Bridge, NJ 08857. 732-679-4422. A Mass of Christian burial will be on Saturday July 20, 2019 at 9:30AM at St. James Catholic Church, 94 Broad Street, Red Bank, NJ 07701. Committal service will immediately follow to Resurrection Cemetery, 361 Sharrots Avenue, Staten Island, NY 10309

Gloria Martines, age 90, originally of Brooklyn, NY, most recently of Lincroft, NJ, passed away, surrounded by the love of her family, on Wednesday July 17, 2019. Gloria was born July 7, 1929 in Brooklyn, NY. She is the daughter of the late... View Obituary & Service Information

The family of Gloria Martines created this Life Tributes page to make it easy to share your memories.

Send flowers to the Martines family.