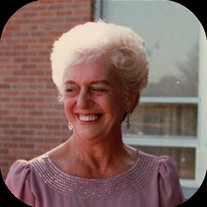 Gloria Blake passed away on February 23,2016 at Parker House Monroe Township. Born in New York City in 1926 she lived in Greenwich Village and then moved to Astoria Queens. In 1958 she moved to Old Bridge where she lived until relocating to... View Obituary & Service Information

The family of Gloria Blake created this Life Tributes page to make it easy to share your memories.

Send flowers to the Blake family.