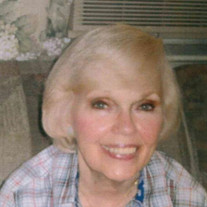 Gertrude E. Kraetsch better known as Trudy, 84 of Howell, New Jersey passed away on Monday, September 21, 2020, at her home. Born Monday, December 9, 1935 in Teaneck, New Jersey, Trudy was the daughter of the late Charles and Elsie Schumann. Trudy was raised in Teaneck, NJ and would graduate from Teaneck High School. She would move to Old Bridge NJ where she would raise her daughter. Trudy would move to Howell, in 1982. She worked as a mail handler for the United States Postal Service in Kearny, NJ. Make the commute every day, in all weather. In her spare time, Trudy enjoyed gardening and spending time with her family, and she was an cat lover. Trudy will be missed by all those that were blessed to have her in their lives. Trudy is survived by her loving daughter, Gwen McFadden, by her cherished grandchildren, Eric McFadden, and Heather Barrett and her husband, Donald, by her adored great grandchildren, Wyatt Barrett, Madelyn McFadden, Katelyn McFadden, and Dylan McFadden, and by her caring sister Betty Johnson. The family will gather at 11:00 AM on Thursday at Michael Hegarty & John Vincent Scalia Home For Funerals and Cremation Service located at 3377 US Highway 9 Old Bridge, New Jersey 08857. Interment will be in Holy Cross Burial Park Cemetery, East Brunswick, NJ. Online condolences may be made to the family at www.HegartyScaliaFuneralHome.com

The family of Gertrude E. Kraetsch created this Life Tributes page to make it easy to share your memories.

Send flowers to the Kraetsch family.