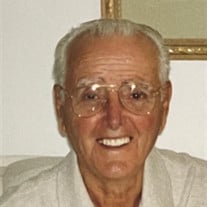 George Melissinos, 96 of Old Bridge, New Jersey passed away on Saturday, June 26, 2021, at the Reformed Church Home in Old Bridge. Born Sunday, December 14, 1924 in New York, New York, George was the son of the late Nicholas and Daisy Melissinos. George was raised in Bayside, Queens. After graduating from High School he joined the United States Marine Corps. He was deployed to the Pacific Theater during World War II. George served his country honorably. He was honored for his service in Guadalcanal and also for action against enemy forces at New Georgia during the height of WW II. After returning home from the war, George would settle back in Bayside. He would meet the love of his life, Doris Hanly, one night in Astoria, and the couple would be inseparable ever since. They would wed and raise their own family in Queens. George would start his own trucking company, TAG Trucking. He would work hard long hours until his retirement. The weekends were always enjoyed with the family at their summer home at Breezy Point. George and Doris would move there full time for a short while, before retiring to live in Florida. Five years ago they would return north and move to Old Bridge to be closer to their family. In his spare time George enjoyed playing golf, and going to the horse races. He was an avid sports fan, who's favorite teams were the NY Yankees and the NY Giants. More than anything else, George enjoyed being with his family, and he will be missed by all those who loved him. George is survived by his beloved wife of 70 years, Doris, by his loving children, George and wife Laurie, Gary and wife Shari, and Gaile Valcho and husband Matthew, by his cherished grandchildren, Michael, Dana, Ryan, and Brady, by his adoring great grandchildren, Michael, Joseph, Nikolas, and Olivia, and by his caring sister, Irene Brzezinski. A Funeral service with prayers and military honors will be at 6:00 PM on Wednesday at Michael Hegarty & John Vincent Scalia Home For Funerals and Cremation Service located at 3377 US Highway 9 Old Bridge, New Jersey 08857. The family will receive friends from 3:00 PM to 6:00 PM on Wednesday, June 30, 2021, at Michael Hegarty & John Vincent Scalia Home For Funerals and Cremation Service, 3377 US Highway 9, Old Bridge, New Jersey. Online condolences may be made to the family at www.HegartyScaliaFuneralHome.com

The family of George Melissinos created this Life Tributes page to make it easy to share your memories.

George Melissinos, 96 of Old Bridge, New Jersey passed away on...

Send flowers to the Melissinos family.