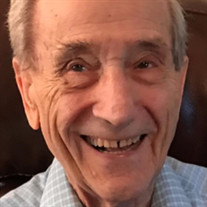 Frank Simonetti, 93 of Old Bridge, New Jersey, passed away surrounded by the love of his family on Thursday, August 1, 2019 at Centra State Medical Center in Freehold, New Jersey. Born Sunday, March 14, 1926 in Brooklyn, New York, he was the son of the late Antonin and Rosalia Simonetti. Frank was raised in Brooklyn. After high school Frank joined the United States Army and served his country honorably during WW II. Deployed to the Philippines, he received multiple citations and decorations. It was during that time serving in the Army that he started corresponding with Rose LaTorre, and the two wrote letters back and forth throughout the war. When Frank returned home from the Philippines, he and Rose married. They lived in Brooklyn and raised their family there. Frank worked as an electrician for the City of New York, mainly working in Queens. Frank was a member of the Sons of Italy, as well as the Knights of Columbus. After retirement the couple moved to Bovina Center, NY. Frank loved the tranquility of being in the mountains. In his spare time Frank enjoyed watching baseball, especially his favorite team the New York Mets. But being with family is what he valued most. He was a caring, loving, gentle man who will be missed by all those that loved him. Frank is survived by his beloved wife of 71 years, Rose, by his loving children, Anthony Simonetti and his wife Donna, Roseann Savasta and her husband Frank, Linda DeCarlo and her husband Danny, and Frank Simonetti and his wife Concetta, by his cherished grandchildren, Michael Simonetti, Joseph Simonetti, John Savasta, Christopher DeCarlo, Anthony Savasta, Steven Simonetti, Dana DeCarlo, and Matthew Simonetti, and by his adored great grandchildren, Ava and Lucas Simonetti. A Mass of Christian Burial will be held at 9:00 AM on Tuesday at St. Thomas the Apostle located at 1 St Thomas Plaza Old Bridge, New Jersey 08857. Interment will be in Brigadier General Wm. C. Doyle Veterans Cemetery, Wrightstown, NJ The family will receive friends from 2:00 PM to 4:00 PM and 6:00 PM to 9:00 PM on Monday, August 5, 2019, at Michael Hegarty & John Vincent Scalia Home For Funerals and Cremation Service, 3377 US Highway 9, Old Bridge, New Jersey. In lieu of flowers the family requests that donations to the St. Jude's Children's Hospital are made in Frank's memory. The link is provided below. https://www.stjude.org/donate/donate-to-st-jude.html Online condolences may be made to the family at www.HegartyScaliaFuneralHome.com

Frank Simonetti, 93 of Old Bridge, New Jersey, passed away surrounded by the love of his family on Thursday, August 1, 2019 at Centra State Medical Center in Freehold, New Jersey. Born Sunday, March 14, 1926 in Brooklyn, New York, he was the... View Obituary & Service Information

The family of Frank Simonetti created this Life Tributes page to make it easy to share your memories.

Send flowers to the Simonetti family.