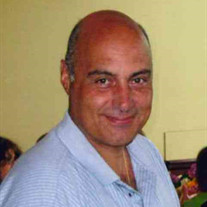 Frank Steven D'Onofrio, 69 of Parlin, New Jersey passed away on Friday, January 22, 2021, at the Bayshore Community Hospital in Holmdel, New Jersey. Born Friday, November 23, 1951 in Brooklyn, New York, Frank was the son of the late Frank and Clara D'Onofrio. Frank was raised in Brooklyn. He was a graduate of James Madison High School, and then attended Kingsborough College, where he earned a degree in business. Frank would meet the love of his life Barbara Meyrowitz, and they would soon marry. The couple would move to the Annadale section of Staten Island and that is where they raised their children. Frank worked with Argo International in New York City, as well as Lyndhurst, NJ, as director of purchasing/procurement until his retirement in 2018. Soon after retirement Frank and Barbara relocated to Parlin, NJ. He enjoyed trips to Atlantic City and listening to good music. He was a lifelong Chicago Bears fan and enjoyed watching the games with his son. Frank was a caring and loving man who enjoyed spending time with his family and friends, especially the time spent with his grandchildren. Frank would always make sure he was there for the soccer games and the all the gymnastic competitions. He lived his life for his children and his grandchildren, and never missed an opportunity to be with them. Frank will be missed by all those that loved him. Frank was predeceased by his parents, Frank and Clara and by his brother Steven. Frank is survived by his beloved wife of 46 years, Barbara, and by his loving children, Tara Palmieri and husband Joseph and Christopher and wife Laura, and by his cherished grandchildren, Hailey, Ava Grace, Callie Hope, and Christopher. A Funeral Mass will be held at 10:30 AM on Thursday at St. Ambrose Parish, 83 Throckmorton Lane Old Bridge, NJ. A private, family only Entombment service will take place immediately following the funeral mass. The family will receive friends from 2:00 PM to 4:00 PM and 7:00 PM to 9:00 PM on Wednesday, January 27, 2021, at Michael Hegarty & John Vincent Scalia Home For Funerals and Cremation Service, 3377 US Highway 9, Old Bridge, New Jersey. In lieu of flowers the family asks that donations in Frank's memory are made to the Alzheimer's Association: www.alz.org Online condolences may be made to the family at www.HegartyScaliaFuneralHome.com

The family of Frank Steven D'Onofrio created this Life Tributes page to make it easy to share your memories.

Send flowers to the D'Onofrio family.