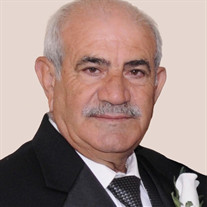 Francesco Reitano, 76 of Old Bridge, New Jersey passed away on Thursday, May 21, 2020, at his home, surrounded by his loving family. Born Friday, August 20, 1943 in Fiumara, Italy. He was the son of the late Antonino and Maria Rosa Reitano. Frank as he was known to his friends migrated to the United States at age 16 and settled in Brooklyn, NY Where he met the love of his life Agatha Reitano. The couple would marry and raise their children in the Bensonhurst section of Brooklyn. Frank worked for Stuart Dean for many years, in metal maintenance, working mainly at Rockefeller Center. After their children were older, Frank and Agatha would move from Brooklyn. Settling in Old Bridge, 12 years ago. Frank has a love of birds, Canary's mainly. He was a champion breeder, winning many awards for his cross breeding, and would also judge competitions. He was a founding member of the Kings County Canary Club in Brooklyn, NY and founding member of the COM USA Canary Club in Elizabeth, NJ. Frank also enjoyed being part of his home community, he was a member of the Board of Lake Ridge West, and enjoyed spending warm days at the community pool. What Frank loved the most was being with his family, just last year in celebration of Frank and Agatha's Golden Wedding Anniversary the family took a cruise together, a blessing of memories that will live on forever. Frank will be missed by all those that were blessed to have him in their lives. Frank is survived by his beloved wife of 50 years, Agatha, by his loving children, Anthony Reitano and his wife Nella, Maria Scandaglia and her husband Frank, and Santo Reitano and his wife Barbra, by his caring sisters, Marianna Guarnaccia, and Antonia Oliveri, and by his cherished grandchildren, Francesco, John, Antonino, Antonino, Julia, Jacob, and Francesco. Funeral services will be private, and will be followed by Entombment at Marlboro Memorial Cemetery, Morganville, NJ. Online condolences may be made to the family at www.HegartyScaliaFuneralHome.com

Francesco Reitano, 76 of Old Bridge, New Jersey passed away on Thursday, May 21, 2020, at his home, surrounded by his loving family. Born Friday, August 20, 1943 in Fiumara, Italy. He was the son of the late Antonino and Maria Rosa Reitano. Frank... View Obituary & Service Information

The family of Francesco Reitano created this Life Tributes page to make it easy to share your memories.

Francesco Reitano, 76 of Old Bridge, New Jersey passed away on...

Send flowers to the Reitano family.