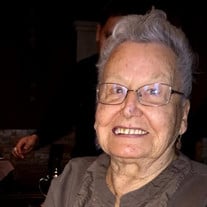 Frances White, 94 of Old Bridge, New Jersey passed away on Friday, March 19, 2021, at the Raritan Bay Medical Center in Old Bridge, New Jersey. Born Saturday, March 19, 1927 in the Bronx, New York, to the late Frank and Karalina Grubauer. Fran was raised in the Bronx where she graduated from high school and also from the New School in New York. She began her career at Eastern Airlines in New York City. It was there she would meet her future husband, William T. White. Soon after being married they were transferred to St. Charles Missouri with Eastern. In 1960, the family relocated to Madison Township, now known as Old Bridge, NJ. Fran would further her education by obtaining a Master's degree in Travel and Tourism from Thomas Edison College. Fran worked for and managed a number of travel agencies throughout her career from the 1960's through the 1990's including Odyssey Travel in the East Brunswick Mall. Her career and background in travel led Fran to many destinations including Europe, Russia, China, India, Asia and cruise voyages around the world. Frances was very active in the community of Old Bridge. She took a special interest in education and would serve as the Vice President of the Board of Education in Old Bridge. She took great pride in spearheading the campaign that led to the building of numerous elementary schools, both middle schools and Cedar Ridge High School. She also championed the naming of the elementary schools after the original Mercury astronauts.After her time on the school board, Fran volunteered for many years at the Old Bridge Library. Frances will be missed by those that loved her. Frances is predeceased by her husband William T.White, and by her loving daughter Lisa. Frances is survived by her sons, Kenneth and wife Gloria, Gregory and wife Karen, and William, by her loving sister Mildred Vincel, by her cherished grandchildren, Brian, Lauren, Jeffrey, Ryan, and Christopher, by her adoring great grandson James, and by her longtime caretaker Nadine Angline. A private memorial service will be planned for a later date.

The family of Frances White created this Life Tributes page to make it easy to share your memories.

Send flowers to the White family.