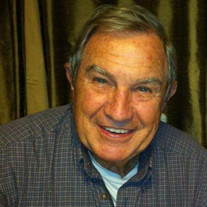 Eugene Valentine Murawski, age 85, of Boca Raton Florida and Staten Island NY, passed away Friday, August 31, 2018 with his loving wife of 64 years, Lois Murawski, at his side. Mr. Eugene Murawski is also survived by his children and their spouses, Glenn and Ellen Murawski, Teresa and Stephen Kane, Kim Helms, Steven and Janet Murawski and Paul and Chanin Murawski; grandchildren Thomas, Glenn, Christopher, Danielle, Leandra, Brittany, Alexa, Stephen, Raleigh, Drew, Gregory, Valerie, Benjamin, Nicholas, Ariel, Katie, Cody, Melody, Caroline, and Luke; 13 great grandchildren with 1 on the way; and brothers, Henry and Edwin as well as many nieces and nephews. Eugene Murawski is preceded by his parents Sophie and Joseph and brothers, Casimir and Steven. Mr. Murawski was born on February 14, 1933 in Brooklyn NY, moved to Florida in 1980 and NJ in 2017. He honorably served in the U.S. Navy during the Korean War and was recognized for his service in 2015 by Honor Flight South Florida. He was a passionate firefighter out of Engine 160 in Staten Island, NY from 1959 to 1979and baker and cake decorator from trade school through retirement. His hobbies included playing cards, bowling, bingo, traveling and spending time with family and friends. He will be remembered for his loving way and kind nature. A gathering of family and friends will take place on Thursday from 2-4 & 7-9PM at the Michael Hegarty and John Vincent Scalia Home For Funerals and Cremation Service 3377 US 9 Old Bridge, NJ 08857 on Religious services will be held at 8:00PM Thursday in the Funeral Home. A Military Funeral will be Friday, September 7th at 10:30am at Brigadier General William C. Doyle Cemetery located at 350 Province Line Rd. Wrightstown, NJ 08562. Contributions in Eugene�s memory may be made to the Lewy Body Dementia Association www.LBDA.org

Eugene Valentine Murawski, age 85, of Boca Raton Florida and Staten Island NY, passed away Friday, August 31, 2018 with his loving wife of 64 years, Lois Murawski, at his side. Mr. Eugene Murawski is also survived by his children and their... View Obituary & Service Information

The family of Eugene Murawski created this Life Tributes page to make it easy to share your memories.

Send flowers to the Murawski family.