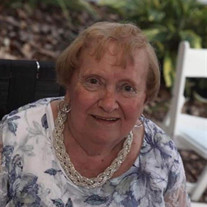 Ethel Laughlin, 87 of Old Bridge, New Jersey passed away on Tuesday, April 14, 2020. Born Sunday, March 12, 1933 in Gerardsville, Pennsylvania, she was the daughter of the late Francis and Elizabeth Williams. Growing up in the coal region of Pennsylvania, Ethel was part of a large family. One of 12 children born to Francis and Elizabeth. After graduating from High School, Ethel would attend Ashland State nursing school, and graduate as a Registered Nurse. Eventually moving to the Bronx, NY, she would live with her sister on the Grand Concourse. It was while working as a nurse she would meet the love of her life, Francis 'Frank' Laughlin. Soon after the couple would marry and start their family. They would move to Old Bridge, NJ in 1961, and would remain there to raise their children. For 50+ years, Ethel was a nurse with Dr. George Brennan at the Sayerville Medical Group on Throckmorton Lane in Old Bridge. Ethel was a devout Catholic and had a love for her parish, St. Ambrose. She was involved with many different parish organizations, the Altar Rosary Society, the Bereavement Ministry, the St. Vincent DePaul Society, and was also a Eucharistic Minister. Ethel enjoyed traveling, and taking pilgrimages with church groups, including a very special trip to Assisi in Italy. Ethel was even able to shake hands with Pope John Paul II. Ethel was a huge New York Yankees fan, and her favorite player was Derek Jeter. In her spare time, Ethel enjoyed sewing, and reading, and of course, more than anything, she loved being surrounded by her family. Ethel was a strong, loving, and faithful woman, who will be deeply missed by all those that were blessed to have her in their lives. Ethel was predeceased by her beloved husband, Frank, and by her loving son, Fran. Ethel is survived by her loving children, Kathleen D'Amico, and her husband Allen, Karen Iervoline, and her husband Michael, and Thomas Laughlin, and his wife Mary Ellen, by her cherished grandchildren, Lauren D'Amico, Leslie D'Amico, Kaitlin D'Amico, Kimberly Iervoline, Meredith Iervoline, Kevin Laughlin, Owen Laughlin, and Brendan Laughlin, by her adored great grandson, Malcolm Francis D'Amico, and by her caring siblings, Ann Morgan, Sarah Croce, Frances Napolitano, Robert Williams, and Stephen Williams. A private family funeral service will take place, followed by interment at Holy Cross Burial Park, East Brunswick, NJ.

Ethel Laughlin, 87 of Old Bridge, New Jersey passed away on Tuesday, April 14, 2020. Born Sunday, March 12, 1933 in Gerardsville, Pennsylvania, she was the daughter of the late Francis and Elizabeth Williams. Growing up in the coal region... View Obituary & Service Information

The family of Ethel Laughlin created this Life Tributes page to make it easy to share your memories.

Send flowers to the Laughlin family.