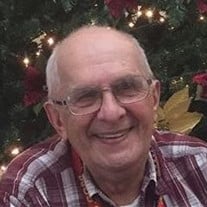 Ernest J. "Ernie" Sobieski, 88, a loving family man and proud veteran of the United States Marine Corps died peacefully surrounded by his loving family, on Thursday, April 6, 2017, at Brandywine Senior Living in Colts Neck, New Jersey. Born March 18, 1929 in Wilkes Barre, Pennsylvania, Ernest was the son of the late Peter and Catherine Sobieski. After leaving Wilkes Barre, Ernest and his wife Genevieve moved to Old Bridge, NJ, where they would raise their family. When it was time to retire Ernest and Genevieve moved to Benton, PA. They would eventually return home to New Jersey. After 62 years of marriage, Genevieve passed away in 2014. Ernest was very proud to have honorably served his country as Staff Sergeant in the USMC during the Korean War. Ernest worked at Hercules in Parlin, NJ for 18 years, and then Cities Service in Linden, NJ for 20 years, prior to his retirement in 1990. Ernest served as OCAW Union President, and was a member of the Knights of Columbus in Benton. Throughout his lifetime, Ernest enjoyed spending time hunting, fishing, bowling, gardening, woodworking, playing poker with friends, playing with his beloved dog "Jersey", but most of all spending time with his wife, children, and grandchildren. Ernie was a lovable man, devoted to his wife and family. He will be sadly missed by all those who loved him. Ernest is survived by his loving children, Cindy Sobieski, Angie Banning and her husband Richard, Patti Bacon and her husband John, Ernest Jr., daughter in law Kelly Vasquez, Joseph and his wife Christine, Amy Marcus and her husband Allan, Jennifer Agostin, who was like a daughter to him, and by his cherished grandchildren, Christopher Knowles, Alison Bacon, Jay Bacon, Eric Bacon, Ernest Sobieski III, Jake Sobieski, Jenna Sobieski, Zack Sobieski, Evan Sobieski, Joseph Sobieski Jr., Andrew Sobieski, Kyle Sobieski, Sara Marcus, Emily Marcus, and Catey Marcus. The family would like to thank the administrators and caregivers of Brandywine, Colts Neck, for the compassion, love, and extraordinary care they provided Ernie over the past six years. Additionally, the family would like to thank VITAS Hospice Services. The family will receive friends from 4:00 PM to 7:00 PM on Monday, April 10, 2017, at Michael Hegarty & John Vincent Scalia Home for Funerals and Cremation Service, 3377 US Highway 9, Old Bridge, New Jersey. A Mass of Christian Burial will be at 9:00 AM on Tuesday, April 11, 2017 at St. Thomas the Apostle Church located at One St. Thomas Plaza Old Bridge, New Jersey 08857. Interment will be in Benton Cemetery, Benton, PA. In lieu of flowers the family asks that donations be made to the Alzheimers Association in memory of Ernest J. Sobieski.

The family of Ernest Joseph Sobieski created this Life Tributes page to make it easy to share your memories.

Send flowers to the Sobieski family.