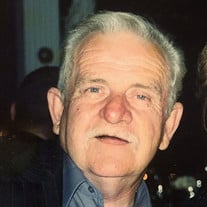 Edward Moench, 77, of Brick, New Jersey passed away on Sunday, March 14, 2021, at home. Born Tuesday, October 5, 1943 in Jersey City, New Jersey, he was the son of the late Frederick Moench and Margaret Purdie. Edward was raised in Jersey City, after school he would go on to learn the trade of automobile mechanic. Working for many years in that field he would rise to the rank of Lead Fleet Diesel Mechanic working for 35 years at Roadway Express trucking until retirement. Edward would move to Bayonne, NJ before settling in Old Bridge with Rosemary, where he would raise his children. In 1996 he would meet and marry, Gail. They lived in Old Bridge & Brick, NJ. Throughout Edward's life he loved being on a boat fishing, spending time in Atlantic City and was an active and avid motorsports enthusiast and also a driver in Stock Car racing. He was a long time fixture at Wall Stadium for races and also participated supporting the Garden State Vintage Stock Car Club. Edward also enjoyed playing poker and became a part of the World Tavern Poker league for many years, traveling around to play in events around New Jersey. Edward will be missed by family and friends. Edward was predeceased by his parents, Frederick and Margaret, brother Fred and by his son Edward. Edward is survived by his wife, Gail, by his children, Deborah Brindisi and husband Brian, Lisa Moench, Fred Moench and wife Janice, Pamela Moench, Gregory Moench, and Justin Moench, by his siblings, George Purdie and wife Elizabeth and Scott Purdie and wife Margaret, by his step children, Denise Gipe and husband Wes, and James Jett Jr., by his grandchildren, Richard, Jenna, Robert, Nicole, Travis, Carley, Billie-Allison, Angelina, Joseph, Alexis, Cody, Coral, Edward, Krystal, Toni Ann and by his great grandchildren Sophia & Jace. A memorial gathering will take place between the hours of 12:00 PM to 3:00 PM on Sunday, March 21, 2021, at Michael Hegarty & John Vincent Scalia Home For Funerals and Cremation Service, 3377 US Highway 9, Old Bridge, New Jersey. In lieu of flowers donations can be made to Ronald McDonald House Charities at https://www.rmhc.org/donate

Edward Moench, 77, of Brick, New Jersey passed away on Sunday, March 14, 2021, at home. Born Tuesday, October 5, 1943 in Jersey City, New Jersey, he was the son of the late Frederick Moench and Margaret Purdie. Edward was raised in Jersey... View Obituary & Service Information

The family of Edward Moench created this Life Tributes page to make it easy to share your memories.

Edward Moench, 77, of Brick, New Jersey passed away on Sunday,...