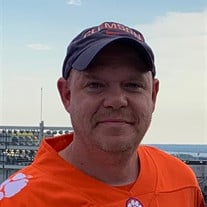 Edward Hussey, 49 of Old Bridge, New Jersey has passed away, he will be missed by all those his life has touched. Born Monday, February 1, 1971 in Jersey City, New Jersey, Edward was the son of Robert and Carol Hussey. Raised in Jersey City until the age of 16, the family would relocate to Old Bridge. Edward would go on to attend and graduate from Cedar Ridge High School. After high school Edward would attend Kean College, graduating with a degree in Finance. He worked with Guggenheim Partners, achieving the title of Vice President. Edward was active in his local community of Lakeridge, and was a member of the board of directors. He was an avid NY Jets fan, and also a fan of Clemson University sports, where his daughter, Allie attends. More than everything else Edward loved being with his family, he was a loving and caring man who will be missed by all those that were blessed to have had him in their lives. Edward is survived by his beloved wife of 23 years, Kimberly (Merenda), by his loving daughters, Allie, Katie, and Megan, by his loving parents, Robert and Carol Hussey, caring siblings, Bobby Hussey and his wife Lana, Michael Hussey and his wife Angela, Carolyn Schimming and her husband Brian, and Colleen Hyndman and her husband Brian, by his caring mother and father in law, Robert and Marie Merenda, by his caring brother in law Scott Merenda, and by many loving cousins, nieces, nephews, and friends. A Memorial gathering will be held between the hours of 4:00 PM and 7:00 PM on Thursday at Michael Hegarty & John Vincent Scalia Home For Funerals and Cremation Service located at 3377 US Highway 9 Old Bridge, New Jersey 08857. A prayer service will take place at 6:45 PM. In Lieu of flowers the family asks that donations are made to the memorial below. All proceeds will go directly to the Hussey family. https://www.gofundme.com/f/edward-hussey?utm_source=customer&utm_medium=email&utm_campaign=p_cp+share-sheet During the current phase of reopening during the New Jersey State of Emergency the funeral home has a maximum capacity of 60 people at any time. Please be understanding of that restriction when coming to pay your respects to the Hussey family. We respectfully ask that you limit the time spent in the funeral home to allow others to pay their respects. Online condolences may be made to the family at www.HegartyScaliaFuneralHome.com

Edward Hussey, 49 of Old Bridge, New Jersey has passed away, he will be missed by all those his life has touched. Born Monday, February 1, 1971 in Jersey City, New Jersey, Edward was the son of Robert and Carol Hussey. Raised in Jersey City... View Obituary & Service Information

The family of Edward Hussey created this Life Tributes page to make it easy to share your memories.

Edward Hussey, 49 of Old Bridge, New Jersey has passed away,...

Send flowers to the Hussey family.