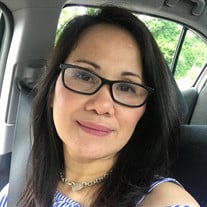 Edna Salting, 56 of Spotswood, New Jersey passed away on Friday, February 1, 2019, at Robert Wood Johnson University Hospital in New Brunswick, New Jersey. Born Saturday, January 26, 1963 in San Miguel, Philippines, she was the daughter of the late Vincente and Emilia Dino. Edna was raised in San Miquel, Philippines, and that is where she would raise her family. In 1999, Edna would move to Old Bridge, NJ. She would remain there until recently moving to Spotswood. Edna was a devout Catholic. She had a life well lived by doing what she loved the most, traveling. She was an incredible cook and enjoyed making meals for her family and friends. She will be terribly missed by all those whose lives were touched by her. Edna is survived by her loving children, Ailene Salting, Jeff Salting, Carlo Salting, and Justin Salting, and be her cherished grandchildren, Noah, Gavin, and Chloe, and by her many caring brothers and sisters. A Funeral Mass will be held to celebrate her beautiful life at 10:30 AM on Tuesday at St. Ambrose Church located at 81 Throckmorton Ln Old Bridge, New Jersey 08857. Online condolences may be made to the family at www.HegartyScaliaFuneralHome.com

The family of Edna Salting created this Life Tributes page to make it easy to share your memories.

Edna Salting, 56 of Spotswood, New Jersey passed away on Friday,...

Send flowers to the Salting family.