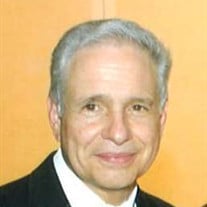 Dominick Franchini, 73 of Old Bridge, New Jersey died on Saturday, August 19, 2017, at home surrounded by his loving family. Born Thursday, June 22, 1944 in Brooklyn, New York, Dominick was the son of the late Louis and Raffaela Franchini. Growing up in Brooklyn Dominick would graduate from Lafayette High School. He would eventually go onto the New York Technical Institute and the RCA Institute. Dominick would go on a blind date arranged by his brother and it was on that date he would meet the love of his life, Linda Dovico. They would wed in 1971 and would be married for the next 46 years. In 1983 the family would move to Old Bridge and remained there to raise their family. Dominick was a Broadcast Technician working with CBS television in New York City. He was a member of the Radio and Television Broadcast Engineers Union local IBEW 1212. Dominick was a devout Catholic and practiced his faith regularly, he enjoyed praying the Rosary. He also enjoyed learning about the faith, never missing an opportunity to further his knowledge. Dominick will be missed by all who were blessed to have had him in their lives. Dominick is survived by his beloved wife Linda, by his loving children Lori O'Leary and her husband Patrick, Louis Franchini, and Philip Franchini and his wife Christine, by his cherished grandchildren Christopher, Daniel, Nicholas, and Vincent, by his caring siblings Anthony Franchini, Rose Ann Cannizzaro, and Joseph Franchini, and by many loving Nieces and Nephews. A Mass of Christian Burial will be held at 10:15 AM on Wednesday at St. Thomas the Apostle Church. Interment will be in Holy Cross Burial Park, East Brunswick, NJ. The family will receive friends from 2:00 PM to 4:00 PM and 7:00 PM to 9:00 PM on Tuesday, August 22, 2017, at Michael Hegarty & John Vincent Scalia Home For Funerals and Cremation Service, 3377 US Highway 9, Old Bridge, New Jersey. The family asks that donations be made to Joan Dancy and PALS, an organization that assists people and families living with ALS. https://ssl.charityweb.net/joandancyandpals/ Online condolences may be made to the family at www.HegartyScaliaFuneralHome.com

The family of Dominick Franchini created this Life Tributes page to make it easy to share your memories.

Send flowers to the Franchini family.