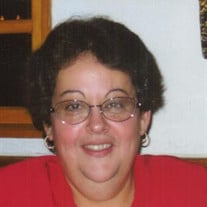 Diana Bonilla, 65 of Staten Island, New York passed away on Tuesday, June 18, 2019, at Robert Wood Johnson - Kindred Hospital in Rahway. Born Saturday, October 17, 1953 in Brooklyn, New York. Diana was the daughter of Ana Toledo, and the late William Quintana. Diana, known affectionately as 'Chickie', was raised in Brooklyn. She would graduate from Bay Ridge High School. Diana worked as a Medical Secretary in Manhattan. Diana would eventually move to Staten Island. Diana enjoyed spending her time playing word games, and Sudoku. She was a beautiful person who will be missed by all those that loved her. Diana is survived by her son, Jason Bonilla, by her grandchildren, Christian, Penelope, and Audrey, by her mother Ana Toledo, by her siblings, Sally Morro, Mercedes Quintana, and William Quintana, and by her loving nieces and nephews. The family will receive friends from 2:00 PM to 4:00 PM and 6:00 PM to 9:00 PM on Saturday, June 22, 2019, at Michael Hegarty & John Vincent Scalia Home For Funerals and Cremation Service, 3377 US Highway 9, Old Bridge, New Jersey. A Service will take place in the funeral home during the evening visitation hours. Online condolences may be made to the family at www.HegartyScaliaFuneralHome.com

The family of Diana Bonilla created this Life Tributes page to make it easy to share your memories.

Send flowers to the Bonilla family.