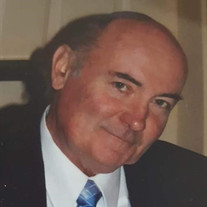 Daniel J Corley, 70 of Matawan, New Jersey passed away on Monday, August 6, 2018, at home, surrounded by his loving family.. Born Friday, April 16, 1948 in Staten Island, New York, Daniel was the son of the late John and Edith Corley. Raised in Staten Island, Daniel was a graduate of Port Richmond High School. He served in the United States Army and fought for his country during the Vietnam War. his dedicated, and courageous service was honored with a Bronze Star and a Purple Heart. Upon return from the war, Daniel went on to work in Finance. At the age of 22 he became a vice president/stock broker of E.F. Hutton which later became Lehman Brothers, he would work for them for 40 plus years. It was on the floor of the New York Stock Exchange where he met Patrice McEnaney, and his request for a Tic Tac would lead to a lifetime of love. Soon after the couple would marry and begin their family and relocated to Middletown, NJ for 24 years. The happy couple later relocated to Matawan after Daniel retired. Daniel was a devout Catholic, and attended mass everyday. In his spare time Daniel enjoyed golfing, especially with his older brother Douglas. He also enjoyed Painting, reading Classic Literature, and cooking for his family. Daniel also loved sports and rooting for his favorite teams, the New York Jets, and the New York Mets. Daniel will be missed deeply by all those who loved him. Daniel is predeceased by his parents John and Edith Corley, and by his brother-in-law Joseph Petta. Daniel is survived by his beloved wife of 41 years, Patrice, by his loving children, John Corley, Megan Mrozinski and her husband Matthew, Daniel Corley, and Kaitlyn Corley, by his caring siblings, Douglas Corley and his wife Fran, Catherine Petta, Maureen Larsen and her husband John, Peggy Janks and her husband Robert, and Edie Bousanti and her husband Nick, by his cherished grandchildren, Caroline Corley, Jack Corley, and Sammy Corley, and by many loving nieces and nephews. A Memorial Mass will be celebrated on Saturday, August 18, 2018 at, 10:00 AM, at St. Clement Church, 172 Freneau Avenue Matawan, NJ 07747. Family and friends are encouraged to attend to celebrate Daniel's life. Online condolences may be made to the family at www.HegartyScaliaFuneralHome.com

The family of Daniel J Corley created this Life Tributes page to make it easy to share your memories.

Send flowers to the Corley family.