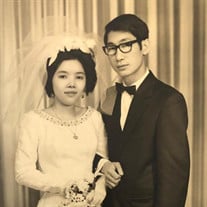 Christopher Chan/Charming Eng was born on June 16, 1943 in Canton, China. As an orphan from China with 7 siblings, Christopher traveled the world from Cartagena, Colombia, and Curacao, and won a small lottery with enough money for a 1-way ticket to the United States. Christopher graduated from DeVry and New York City University with a concentration in electronics design. He went on to work for many companies including but not limited to military defense contractors, Lucent Technologies and Avionics Instruments. Christopher became a naturalized citizen on September 24, 1982. He had battled and beaten colon cancer and had been in remission for 10 years. Christopher was an avid gardener, loved to go fishing, and was able to fix anything that was broken. He was also multi-lingual, speaking Mandarin, Cantonese, Spanish, English and Papiamento. Eileen Eng (Wong) was born on October 22, 1947 in Manhattan, New York. She went to school at Jane Adams High School with an interest in fashion. For many years she worked alongside Christopher in their two small electronics businesses. Before retiring, she worked in food services. Eileen was a breast cancer survivor who also battled multiple myeloma. With treatment, she was able to continue trying new foods, traveling and spending time with her New York and New Jersey relatives. Eileen and Christopher met in 1970 and were married for 50 years.Together they had three beautiful children: Christine, Louis and Tim. Their family grew even larger with their son-in-law, Fred Diaz; daughter-in-law, Ashley Gustafson, and granddaughter, Evelyn. For many years they lived in Queens, New York. They later moved out of the city to Old Bridge, NJ for a few years, Howell, NJ for 25 years, and finally back to Old Bridge for the past 16 years. As life progressed, their family grew as Christopher was able to reconnect with his biological and adopted siblings residing in California, Canada and Colombia. On April 1, Christopher became ill with COVID-19. He fought valiantly,but unfortunately passed away due to complications on April 11th, 2020 at home. Eileen contracted COVID-19 shortly after. She fought fiercely but also due to complications passed away comfortably on May 2, 2020 at Raritan Bay Hospital. In addition to their children, they are survived by their siblings: Shirley Lee and her husband Donald Lee, Doris Wong, Stacy Huey, and Alba Nelly Fang de Majana. They had numerous nieces and nephews including: Raymond Lee, Nassyr Majana, Christian Lee, Brian Lee, Waimon Wong Jr, and Isaiah Wong.

Christopher Chan/Charming Eng was born on June 16, 1943 in Canton, China. As an orphan from China with 7 siblings, Christopher traveled the world from Cartagena, Colombia, and Curacao, and won a small lottery with enough money for a 1-way ticket... View Obituary & Service Information

The family of Christoper Chan & Eileen Eng created this Life Tributes page to make it easy to share your memories.

Send flowers to the Chan family.