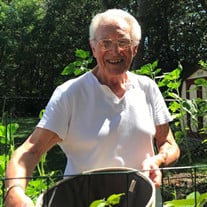 Charles Schembri, 89 of Old Bridge, New Jersey passed away on Tuesday, November 3, 2020. Born Thursday, April 2, 1931 in Brooklyn, New York, Charles was the son of the late Fortunato and Mary Schembri. Charles was born and raised in Brooklyn, NY. He graduated from Brooklyn Tech High School. After high school he joined the United States Army. Charles served his country honorably during the Korean War. When he returned home, he met and married the love of his life, Marie Altare. The couple first lived in Brooklyn before settling in Old Bridge, NJ to raise their children. Charles worked for Bell Labs in Holmdel before retiring in 1989. While working in Bell Labs, he developed many lifelong friendships, and he was a member of the MIA, Mostly Italian Americans, a group of close friends that would dine and travel together. Charles enjoyed a good cigar, Johnnie Walker Black with one cube, listening to Jazz, and playing cards with friends. He also enjoyed playing the drums with his brother and travelling to Brooklyn to visit with his childhood friends. What Charles loved the most was being surrounded by his family, especially his grandchildren. Charles was predeceased by his beloved wife, Marie in 2009, his parents, Fortunato and Mary, and by his brother Frank. Charles is survived by his loving children, Marie Pavelchak and her husband Alan, Cynthia McLavish and her husband Dominick, and Colette Schembri, by his cherished grandchildren, Carly and her fiance Justin, Michael, Samuel and his girlfriend Rachel, Alexander and his girlfriend Santina, and Bailey and her boyfriend Brian, by his caring sisters in law Rosalie, Linda, and Joann, and by many loving nieces and nephews. The family will receive friends from 3:00 PM to 7:00 PM on Friday, November 6, 2020, at Michael Hegarty & John Vincent Scalia Home for Funerals and Cremation Service, 3377 US Highway 9, Old Bridge, New Jersey. A Funeral service will be at 9:30 AM on Saturday at Michael Hegarty & John Vincent Scalia Home for Funerals and Cremation Service located at 3377 US Highway 9 Old Bridge, New Jersey 08857. Interment will be in St. Gertrude Cemetery, Colonia, NJ. Donations can be made in his name to DaVita Dialysis of Matawan, St. Jude’s, The Alzheimer’s Association, or the ARC of Monmouth and Ocean Counties.

The family of Charles Schembri created this Life Tributes page to make it easy to share your memories.

Charles Schembri, 89 of Old Bridge, New Jersey passed away on...

Send flowers to the Schembri family.