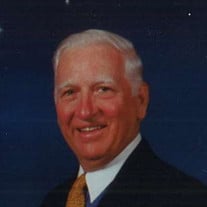 Charles E. Donnelly, 82 of Old Bridge, New Jersey died on Friday, August 4, 2017, at home, surrounded by his loving family. Born Saturday, March 2, 1935 in Mt. Vernon, New York. He was the son of the late Charles and Muriel Donnelly. Charlie grew up in Bayside, Long Island. He would go on to graduate from All Hallows High School in the Bronx and then went on to serve in the U.S. Army Signal Corp. Charlie worked for United Airlines. It is there where he would meet the love of his life Kathleen Schmidt. The two would wed in 1963. Eventually they would move to Old Bridge, NJ and raise their family. Charlie was a community minded man and always gave back. He devoted much of his own time to the many organizations that he belonged to. Charlie was a former President of the Friendly Sons of the Shillelagh in Old Bridge, both in 1980 and in 1990. He was an active member of the Knights of Columbus and the Elks organizations in Old Bridge. Charlie was active with the St. Vincent de Paul Society, the Irish Festival Committee, and the Belmar St. Patrick's Day Parade Committee, which he was named Grand Marshall of in 2002. Charlie was also instrumental in forming the Friendly Sons Jersey Shore Chapter in 1991. In 2014 Charlie was named the Friendly Sons of the Shillelagh Irishman of the Year. But, more than anything, Charlie was a family man first. The biggest enjoyment in his life was being around his family, friends, and flying the Friendly Skies. Charlie will be missed by all of us who were fortunate to have known him and have him in our lives. Earlier this year Charlie suffered a great loss when his beloved wife of 53 years Kathleen passed away, we are grateful for the love they shared together and with all of us. Charlie is survived by his loving children Noreen Barnes and husband Dennis, Patrick Donnelly and wife Michelle, Eileen Biennas and husband Michael, and Brian Donnelly and wife Tracy, his cherished grandchildren Alexandra and husband AJ, Dennis, Jackie, Caitlin, Zach, Patrick, Maddy, Bridget, Gabe, Colm, and Brendan, and his caring sisters Elizabeth Hallick, Mary Jo Chaputian, and Maureen Mantione. A Mass of Christian Burial will be held at 10:15 AM on Wednesday, August 9, 2017 at St. Thomas the Apostle Church, Old Bridge, NJ. Interment will be in Holy Cross Burial Park, East Brunswick, NJ. The family will receive friends from 6:00 PM to 9:00 PM on Monday, August 7, 2017, and from 2:00 PM to 4:00 PM and 7:00 PM to 9:00 PM on Tuesday, August 8, 2017 at Michael Hegarty & John Vincent Scalia Home For Funerals and Cremation Service, 3377 US Highway 9, Old Bridge, New Jersey. The family askes that donations be made in Charlie's memory to the Police Unity Tour Chapter 37. www.policeunitytour37.com Online condolences may be made to the family at www.HegartyScaliaFuneralHome.com

The family of Charles E. Donnelly created this Life Tributes page to make it easy to share your memories.

Send flowers to the Donnelly family.