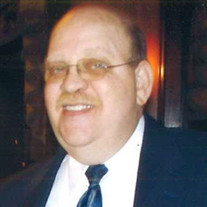 Charles G. Contessa, 65 of Old Bridge, New Jersey passed away on Thursday, November 1, 2018, at Raritan Bay Medical Center in Old Bridge, New Jersey. Born Monday, October 19, 1953 in Brooklyn, New York, Charles was the son of the late Joseph and Mary Contessa. Charles was raised in Brooklyn, NY. After graduating high school Charles would go on to attend Kingsborough College, and New York University. He studied Computer Science. Charles worked as an Application Developer for CCC Service Corporation. Charles was working in the World Trade Center, both in 1993 during the bombing, as well as on September 11, 2001. Charles was married to the love of his life Irene for more than 30 years. They were long time residents of Old Bridge. Charles was a member of the St. Thomas the Apostle Knights of Columbus. Charles was a model train enthusiast, he also enjoyed photography, and had a love for animals, especially his dogs. Charles also had a strong interest in technology, he always had the latest gadget and knew everything about it, he also was interested and very knowledgeable about the Space Program, he could tell you anything you wanted to know about all of the Space Missions. Charles was a loving man and will be missed by all those that were blessed to have known him. Charles is survived by his beloved wife, Irene. Charles is also survived by many loving cousins. A Mass of Christian Burial will take place on Wednesday at 10:15 AM at St. Thomas the Apostle Church, Old Bridge, NJ.. Entombment at Forest Green Memorial Park to follow. Family and friends are invited to gather from 2:00 PM to 4:00 PM and 6:00 PM to 9:00 PM on Tuesday, November 6, 2018, at Michael Hegarty & John Vincent Scalia Home For Funerals and Cremation Service, 3377 US Highway 9, Old Bridge, New Jersey. Online condolences may be made to the family at www.HegartyScaliaFuneralHome.com

The family of Charles G. Contessa created this Life Tributes page to make it easy to share your memories.

Send flowers to the Contessa family.