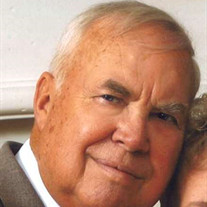 Charles Edward Cannon, 86 of Manchester, New Jersey passed away on Tuesday, September 25, 2018, at Ocean Medical Center in Brick, New Jersey. Born Wednesday, March 30, 1932 in Lyndhurst, New Jersey to the late Thomas and Karen Cannon. Charles attended St. Michaels High School in Union City, NJ, where he was a kicker for the school's football team. Charles was a proud veteran of the United State Army, he served during the Korean War, stationed at Ft. Dix. After the service Charles began work as a Typesetter with the NY Times. Charles would meet the love of his life Dorothy (Corley) in Seaside Heights, NJ. Tthe couple were married in 1957, started their family and in 1959 moved to the Sayrewoods South section of Old Bridge. That is where they would remain for the next 42 years, before retiring to Manchester. Charles and Dorothy were one of the founding families of St. Ambrose Parrish. Charles loved to travel, collect coins, play Golf and read. He will be missed by all that knew and loved him. Charles is survived by his Beloved wife of 61 years Dorothy, his loving children, Michael Cannon and his wife Debbie, Laura Cannon, and Eileen Rauenbuhler and her husband Scott, cherished grandchildren Chris Cannon and his wife Lindsay, Jason Cannon and his wife Gina, Chelsea Cannon, Paige Rauenbuhler and Ian Rauenbuhler. Charles will be missed by his many caring nieces and nephews. A Mass of Christian Burial will take place at 10:30 AM on Friday at Saint Ambrose Church located at 83 Throckmorton Ln Old Bridge, New Jersey 08857. Interment will be in Holy Cross Burial Park, East Brunswick, NJ. The family will receive friends from 4:00 PM to 8:00 PM on Thursday, September 27, 2018, at Michael Hegarty & John Vincent Scalia Home For Funerals and Cremation Service, 3377 US Highway 9, Old Bridge, New Jersey. Online condolences may be made to the family at www.HegartyScaliaFuneralHome.com

The family of Charles Edward Cannon created this Life Tributes page to make it easy to share your memories.

Send flowers to the Cannon family.