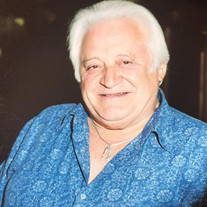 Caetano Buono, 85 of Staten Island, New York passed away on Thursday, April 16, 2020, at Staten Island University Hospital North in Staten Island, New York. Born Monday, August 6, 1934 in Sao Paulo, Brazil., he was the youngest child of the late Geraldo and Angelina Buono. Caetano was raised in Brazil, where he would also meet his beloved wife Nobuco Okabe, spending 62 loving years together. There, they had their first born son, Claudio. In 1965, the family of three immigrated to the United States. They first settled in Brooklyn, where their second born son, Cesar, was born. After spending a few years in Brookyn, making friends and working hard, Caetano moved his family to Staten Island in 1976. A trailblazer in his time, with a mind for inventing, led him down a path that would eventually save millions of lives and leave a global impact. Caetano, with the help of his young sons, went on to invent the push turn safety cap, receiving multiple patents for it's design. He enjoyed working and perfecting his inventions designs, as he continued to work into his 80's. Caetano had a passion for Opera, and would enjoy singing the classics. The family was known for hosting their annual holiday party, where Caetano would sing many of his favorites. Caetano also loved to travel the world with his wife, visiting countless countries making memories that would last a lifetime. He was a caring, selfless man; always putting his family first. He would do anything for his kids and his grandchildren. He loved his family and friends with an open heart. To know him was to love him. He will be forever missed by all those that knew him. Caetano was predeceased by his son Claudio Buono, who passed away in 2015. Caetano is survived by his beloved wife, Nobuco, by his loving son, Cesar, by his cherished grandchildren, Kelly Buono, Kevin Buono, and Carlie Buono, and by his caring daughter in law, Kathy. Funeral services will be private, and followed by interment at Resurrection Cemetery, Staten Island, NY. Online condolences may be made to the family at www.HegartyScaliaFuneralHome.com

The family of Caetano Buono created this Life Tributes page to make it easy to share your memories.

Send flowers to the Buono family.