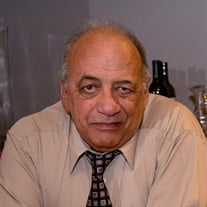 Biaggio Ippolito, 78 of Old Bridge, New Jersey died on Tuesday, November 14, 2017, at Hackensack Meridian Hospital in Old Bridge, New Jersey. Biaggio was born to the late Peter and Edith Ippolito on Tuesday, July 25, 1939 in Brooklyn. Biaggo, 'Bob' , as he was best known, was raised in Brooklyn. After graduating from High School Bob would go on to join the United States Navy, serving on board the USS Saratoga. Upon returning from the Navy, Bob would marry his childhood sweetheart, the former Anna Savona. The two would marry at St. Anselm in Brooklyn in 1960 and remain there until 1971. Bob and Anna decided to relocate to Staten Island where they would raise their family. Bob, a plumber by trade, had a career as a superintendent with the New York Transit Authority in their heating and cooling division. In 2006, Bob and Anna retired and settled in Old Bridge, NJ. In his spare time, Bob enjoyed playing cards and watching his favorite television programs. Most of all, Bob enjoyed being with his family, particularly his grandchildren. He will be deeply missed by all who love him. Bob is survived by his beloved wife of 57 years Anna; by his loving children, Marie Ippolito, Rob Ippolito, and Laurie Tompkinson and her husband Brian; by his cherished grandchildren, Steve Vysocky, Gina Simon, Julianne Belloni, Deanna Ritzo, and Ava and Gia Tompkinson; and by a cherished great grandson William Simon, and by his caring brother Peter Ippolito. Bob was pre deceased in 1995 by his loving daughter Donna LoMonaco. A Mass of Christian Burial will be held at 10:30 AM on Thursday at Saint Ambrose located at 83 Throckmorton Ln Old Bridge, New Jersey 08857. Interment will be in Resurrection Cemetery, Staten Island, NY. The family will receive friends from 4:00 PM to 9:00 PM on Wednesday, November 15, 2017, at Michael Hegarty & John Vincent Scalia Home For Funerals and Cremation Service, 3377 US Highway 9, Old Bridge, New Jersey. Online condolences may be made to the family at www.HegartyScaliaFuneralHome.com

The family of Biaggio Ippolito created this Life Tributes page to make it easy to share your memories.

Send flowers to the Ippolito family.