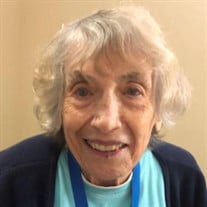 Betty L Rosenthal, 88 of Hillsborough, New Jersey, formerly of Freehold, NJ passed away on Thursday, December 16, 2021 at Bridgeway Care and Rehabilitation Center. Born December 17, 1932 in Newark, NJ to the late Anna Goldberg and Jacob Taylor. Betty was raised in Newark with her two sisters Sybil and Florence before graduating from West Side High School. She married Jerome Rosen in 1953 in a military wedding on the army base in Savannah, Georgia and divorced in 1974 after having 4 children together. She raised her family in Fair Lawn, NJ and enjoyed being actively involved in a number of leadership roles with the Women's American ORT, as well as being a den mother and a girl scout leader, and an active member of the PTA. She enjoyed taking her children to their ball games, scouting events, dance lessons, baton twirling, Crimson Corps, birthday parties, and a variety of other activities. She was proud to have two sons who earned their Eagle Scout rank. After re-marrying to Jules Rosenthal in 1974, she added two stepsons, Mark and Scott Rosenthal to her family and moved to Old Bridge, NJ. There she lived very close to her childhood best friend Rita Schror. She moved to Surrey Downs in Freehold where she lived for many years and was active in countless clubs and activities before moving to All American Assisted Living in Hillsborough for several years. Throughout her life she was predominantly a wife and mother and held some part-time jobs. She was in the rehab area of Bridgeway before being moved to the skilled nursing unit to receive treatment for her ailing health and Alzheimer's disease. Those who knew her saw her as an effervescent social butterfly with a big smile, gregarious giggle, soft-spoken voice and love of parties, singing and dancing. She loved being around people, reading, word puzzles, and listening to Vic Damone (who she got to see in concert as a graduation present) . She was known to be flirty, funny, sensitive and kind. Her motto "Be honest, and be nice to everyone!" Although she was reluctant to try new things, family managed to coax her to ride a bicycle built for two, go in the ocean and pool, ride a horse, roller skate, and ice skate. Betty is predeceased by her loving parents, Anna Goldberg and Jacob Taylor and by her beloved husband Jules Rosenthal and former husband Jerome Rosen. She is survived by her older sisters Sybil (Carmen Cerligione) and Florence (Ernie Caruso) Betty is survived by her sons Robert and wife Carol, Marvin and wife Anita, Leonard and wife Judith and by her caring daughter Natalie Gahrmann and husband Richard. Also by her 8 cherished grandchildren Jennifer (and husband James White), Valerie (and husband Brian Williams), Daniel Rosen, Kaitlyn and Matthew Gahrmann, Marisa Rosen, Alexander and Victoria Rosen, and stepsons Mark (husband Wayne and children Jasmine and Lily) and Scott Rosenthal. She was also adored by her 4 great grandchildren, Ryan, Ashley, and Erin White and Liam Williams. A graveside service is planned for 12:00 noon on Thursday December 23 at the Forest Green Park Cemetery in Morganville. Memorial donations may be made to the Alzheimer's Association. https://act.alz.org/site/Donation Online condolences may be made to the family at www.HegartyScaliaFuneralHome.com

The family of Betty L. Rosenthal created this Life Tributes page to make it easy to share your memories.

Send flowers to the Rosenthal family.