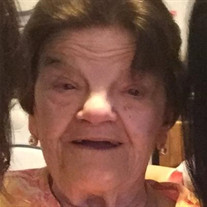 Athena Manoleas, 96 of Milford, Connecticut passed away on Tuesday, February 5, 2019, at Veterans Hospital in West Haven, Connecticut. Born Thursday, December 21, 1922 in New York, New York, she was the daughter of the late John and Evelyn Alicakos. Athena was born and raised in New York. After graduating from Bay Ridge High School Athena would join the United States Army. While serving her country honorably, Athena would learn the skill of typing, she was a secretary in the Army, spending most of her time based in California. After serving her country Athena came home to New York. She would meet and marry the love of her life, John Manoleas. They would live in Brooklyn and that is where they would raise their family. During these years Athena worked as a secretary with New York Life Insurance Company in New York. After retiring Athena would move to Melbourne, Florida, Athena was active in the senior centers, and enjoyed taking trips to play the slot machines at the local casinos. Athena would move again to Milford, Connecticut, to be closer to her family. In her spare time she enjoyed reading and crosswords. Athena enjoyed traveling with her family. She would also continue to enjoy her trips to the casino and local Bingo halls. Most of all she loved being with her family. She will be missed by all those that were blessed to have had her in their llives. Athena was predeceased by her beloved husband of 35 years, John, and by her loving sons, James Manoleas and William Manoleas. Athena is survived by her loving children, John Manoleas, Anthony Manoleas, Carol Panzella and her husband Tony, Janet Manoleas, and by her caring daughter in laws, Kathy Manoleas, and Randi Manoleas, and by her cherished grandchildren, Alyssa, Billy, Francesca, Nicolette, Lauren, Chris, Jennifer, Lisa, John, and Jason, and by 5 adored great grandchildren, and 1 expected great grandchild whom Athena was so excited to meet. The family will receive friends from 9:00 AM to 11:00 AM on Friday, February 8, 2019, at Michael Hegarty & John Vincent Scalia Home For Funerals and Cremation Service, 3377 US Highway 9, Old Bridge, New Jersey. A funeral service will take place in the funeral home before proceeding to Forest Green Park Cemetery in Morganville for the Interment Services. Online condolences may be made to the family at www.HegartyScaliaFuneralHome.com

Athena Manoleas, 96 of Milford, Connecticut passed away on Tuesday, February 5, 2019, at Veterans Hospital in West Haven, Connecticut. Born Thursday, December 21, 1922 in New York, New York, she was the daughter of the late John and Evelyn... View Obituary & Service Information

The family of Athena Manoleas created this Life Tributes page to make it easy to share your memories.

Athena Manoleas, 96 of Milford, Connecticut passed away on Tuesday,...

Send flowers to the Manoleas family.