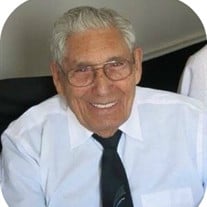 Armando Tesoriero, 91 of Freehold New Jersey died on Friday, April 6, 2018, peacefully... Born Tuesday, August 24, 1926 in Panarea Messina, Italy, Armando was the son of the late Giovanni and Carmela Tesoriero. Armando arrived in the United States at the young age of 12, alone, through Ellis Island and became very familiar with the concept of 'survival'. His daughter Camille states that was one the best lessons in life he ever taught her. The family settled in Brooklyn, NY. Throughout his life Armando lived in different communities in Brooklyn, including Carroll Gardens, Boro Park, and Mill Basin. Eventually he would move to Freehold, NJ and recently Morganville, NJ. Armando was a proud veteran of the United States Army, he served his country honorably during WW II. On a deployment during the war the transport ship he was traveling on was sank in the Atlantic Ocean. Upon returning to Brooklyn from his service Armando met the love of his life, Virginia, and the two were married. They raised their son and daughter in Brooklyn. Armando worked as an inspector for the American Can Company in Williamsburg. He was a member of the American Legion, as well as the Knights of Columbus. In his spare time Armando enjoyed playing Bocce. He was an extremely generous man, who never hesitated to give to others in need. He will be remembered for his love of family and will be missed by all those that loved him. Armando was predeceased by his wife of almost 50 years Virginia, by his son John G. Tesoriero, and by his siblings, Natalie, Bartolina, and Mary. Armando is survived by his beloved daughter Camille Napolitano and her husband Louis, by his caring brother Benny Tesoriero, by his granddaughters Marissa Franklin, Tara Napolitano and great grandchildren Kylie, and McKenzie. A Mass of Christian Burial will be held at 10:30 AM on Wednesday at St. Ambrose Church located at 81 Throckmorton Ln Old Bridge, New Jersey 08857. Entombment will be in Greenwood Cemetery, Brooklyn, NY. The family will receive friends from 2:00 PM to 5:00 PM and 7:00 PM to 9:00 PM on Tuesday, April 10, 2018, at Michael Hegarty & John Vincent Scalia Home For Funerals and Cremation Service, 3377 US Highway 9, Old Bridge, New Jersey. The family asks that donations in Armando's memory be made to the St. Jude Children's Research Hospital. https://www.stjude.org/give.html Online condolences may be made to the family at www.HegartyScaliaFuneralHome.com

The family of Armando Tesoriero created this Life Tributes page to make it easy to share your memories.

Send flowers to the Tesoriero family.