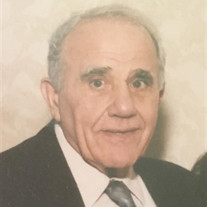 Anthony Malone, 92 of Freehold, New Jersey passed away on Sunday, August 8, 2021, at home. Born Thursday, October 18, 1928 in Brooklyn, New York, he was the son of the late John and Mary Malone. Anthony grew up in the Gravesend section of Brooklyn, where he would spend most of his life. He was a graduate of Lincoln High School, where he was a star athlete, exceling in Baseball, and even earning a tryout for the Brooklyn Dodgers. After high school he would go on to attend the City University of New York. It was during his high school years that he would meet the love of his life, Evelyn Messina. Since the age of 16 they were inseparable. Eventually marrying, the couple would continue to reside in Gravesend. Anthony would be drafted into the United States Army, and serve the country honorably during the Korean War. Upon returning home to Brooklyn, Anthony and Evelyn started a family of their own. Anthony would enter the family business, Malone and Sons florist, which was located on the corner of Coney Island Ave and Avenue V. Anthony and Evelyn would remain in Gravesend until just 6 years ago when they moved to Freehold to be closer to family. Anthony was a longtime active member of the Knights of Columbus in Brooklyn. He achieved his 4th Degree and was elected Grand Knight multiple times. He loved watching baseball, especially his favorite team the NY Mets. Anthony also enjoyed bowling and playing cards with friends. Anthony was a caring and loving man, who will be missed by all those that were blessed to have him in their lives. Anthony was predeceased by his parents, John and Mary, and by his siblings, John Malone, and Corrine Lisa. Anthony is survived by his beloved wife of 71 years, Evelyn, by his loving daughters, Maria Cangialosi and husband Sal, and Angela Ladenheim and husband Steve, by his caring brothers, Joseph and wife Rosemarie, and Richard, by his cherished grandchildren, Jennifer Powell and husband Gary, Matthew Cangialosi and wife Lora Lee, Michael Ladenheim and wife Rebecca, and Anthony Cangialosi, and by his adored great grandchildren, Shannon, Andrew, Olivia, Madelyn, Nicholas, and a future great grandson. The family will receive friends from 4:00 PM to 8:00 PM on Tuesday, August 10, 2021, at Michael Hegarty & John Vincent Scalia Home For Funerals and Cremation Service, 3377 US Highway 9, Old Bridge, New Jersey. A Funeral service will be at 10:00 AM on Wednesday at the Michael Hegarty & John Vincent Scalia Home For Funerals and Cremation Service located at 3377 US Highway 9 Old Bridge, New Jersey 08857. Interment will be in Gate of Heaven, Hawthorne, NY. In Lieu of flowers the family asks that donations to the St, Jude Children's Hospital are made in memory of Anthony.

Anthony Malone, 92 of Freehold, New Jersey passed away on Sunday, August 8, 2021, at home. Born Thursday, October 18, 1928 in Brooklyn, New York, he was the son of the late John and Mary Malone. Anthony grew up in the Gravesend section of... View Obituary & Service Information

The family of Anthony Malone created this Life Tributes page to make it easy to share your memories.

Anthony Malone, 92 of Freehold, New Jersey passed away on Sunday,...

Send flowers to the Malone family.