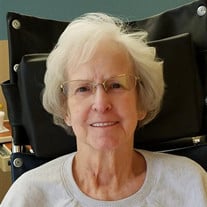 Anna Lois Rutishauser, 85, went home to the Lord on Sunday, December 29, 2019, at Care One at Hanover Township. She was surrounded by the love of her family. Born Saturday, March 17, 1934 in West Hamlin, West Virginia, Anna was the daughter of the late Norman and Alma Adkins. When she was seven years old, Anna and her family moved to Baltimore, Maryland, where she was raised before settling in Newark, NJ. It was in Newark where she met the love of her life, Richard Rutishauser. The couple worked together at Federal Pacific Electric and began their courtship with a bowling date (Anna won). Anna and Richard married and moved to Sayreville where they raised their family and eventually moved to Old Bridge. Anna graduated electronics school and used the skills she learned at her job as a Production Supervisor with Blonder Tongue Laboratories in Old Bridge. Anna was a faithful Christian woman keeping Jesus close at all times. She attended Robertsville Bible Church in Morganville where she was received by many there with love and kindness. Anna enjoyed playing and watching tennis and playing solitaire on her tablet. She also enjoyed returning home to that small town in West Virginia for annual family reunions with generations of loved ones. Her family was her life. Anna was a caretaker to many in her family and always there whenever she was needed. She will be missed for the guidance and support that she gave and for the love she abundantly shared. We were blessed to have had her in our lives. Anna was predeceased by her parents, Norman and Alma Adkins, by her beloved husband of 53 years, Richard, and by her brothers, Darwyn Delane Adkins, Keiffer Vaughn Adkins, and Twyman Lee Adkins. Anna is survived by her loving children, Warren Peter Rutishauser and his wife Michele, and Karen Dawn Roman and her husband Dan; by her cherished grandchildren, Brant Rutishauser and his wife Megan, and Joseph Roman; by her caring sister-in-law, Carole Tevis, and by her nieces and nephews for whom she adored. A funeral service will take place on Friday, January 3, 2020 at 10:30 AM at the Michael Hegarty & John Vincent Scalia Home for Funerals and Cremation Service, 3377 US Highway 9, Old Bridge, New Jersey. Burial will immediately follow at Forest Green Park Cemetery, Morganville, NJ. The family will receive friends from 4:00 PM to 8:00 PM on Thursday, January 2, 2020, at Michael Hegarty & John Vincent Scalia Home for Funerals and Cremation Service, 3377 US Highway 9, Old Bridge, New Jersey. In lieu of flowers, the family requests that donations be made to Robertsville Bible Church in Morganville, NJ. Online condolences may be made to the family at www.HegartyScaliaFuneralHome.com

Anna Lois Rutishauser, 85, went home to the Lord on Sunday, December 29, 2019, at Care One at Hanover Township. She was surrounded by the love of her family. Born Saturday, March 17, 1934 in West Hamlin, West Virginia, Anna was the daughter... View Obituary & Service Information

The family of Anna L. Rutishauser created this Life Tributes page to make it easy to share your memories.

Send flowers to the Rutishauser family.