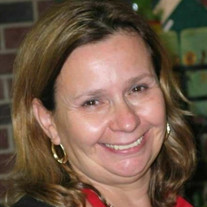 Anna Marie Enriquez, 67 of Manalapan, New Jersey died on Friday, July 28, 2017, at Hackensack University Medical Center, surrounded by her loving family. Born Wednesday, May 31, 1950 in Brooklyn, New York, Anna was the daughter of the late Ramon and Madeline Donate. Anna was born and raised in the Sunset Park section of Brooklyn with her sisters Evelyn, Linda and Lisa. It is also the place she met her best friend and the love of her life, Carl Enriquez. In 1971, Anna would then marry Carl Enriquez to become a Navy wife. Prior to marrying Carl, she had a promising career at Merrill Lynch and continued to work there after she moved to Philadelphia where Carl was stationed with the Navy. Soon after moving to Philadelphia she gave birth to her first child, Jason. They would live there for one year before returning back to Sunset Park, Brooklyn due to Carl's reassignment to sea duty aboard the aircraft carrier, USS Forrestal. Anna then gave birth to her second child, Damon. The family would soon move again to Canarsie where she gave birth to her youngest child, Renee. Besides caring for her family, Anna was also active in the community. She was an outstanding and beloved Scout Leader in Pack 742, one of the largest Boy Scout packs in Brooklyn. She was also an active member of the PTA at P.S. 114. After initial years at home caring for her three children, she began working in the health insurance industry, first making her mark at Lutheran Medical Center. Anna also started her own catering business, Sweet Annie's Catering. In 1991, the family moved to Manalapan, NJ. Anna continued to flourish in her professional career. Anna obtained her associates degree from Thomas Edison State College. Anna became the Marketing & Sales Director for multiple Health Insurance companies and was known for her leadership abilities and a master of marketing and networking. Anna was a success professionally and personally. She was the matriarch of the family. Anna would be sought for words of wisdom and advice, and when Anna spoke her family would listen. Anna was an amazing cook and always the host of most holidays with the family, usually choosing to cook entire banquets solo. Throughout her life she had many hobbies: cooking, playing Bingo, and making professional quality videos of her family to enjoy for years to come. Most importantly, she loved to travel with her husband and best friend, Carl. Anna and Carl have traveled to parts of the world that most people would never go. And not just for relaxation, Anna and Carl were also adventurers. Anna has touched most every continent, including Europe, South America, and even Antartica. But more than anything, Anna loved and enjoyed her family. She was a Wife, Mother, and Grandmother before anything else, and she will be deeply missed by all of those that were lucky to have had her in their lives. Anna is survived by Carl, her beloved husband of 46 years with who she had a life long relationship of 52 years; by her loving children, Jason Enriquez and his wife Kimberly Enriquez, Damon Enriquez and his wife Kelly Enriquez, and Dr. Renee Enriquez-Novack and her husband Dr. Richard Novack; by her cherished grandchildren, Gillian Enriquez-Pruetz, Kyle, Peyton, and Chase Enriquez, and Reagan Novack; and by her caring sisters, Evelyn Bartfield and her husband Lew, Linda Santiago, and Lisa Mecklowsky and her husband David. A Mass of Christian Burial will be celebrated on Thursday, August 3, 2017 at 10:30 AM at St. Michael's Roman Catholic Church, 352 42and Street, Brooklyn, NY. Entombment at Greenwood Cemetery will follow. The family will receive friends from 2:00 PM to 4:00 PM and 6:00 PM to 9:00 PM on both Tuesday, August 1, 2017 and Wednesday, August 2, 2017, at Michael Hegarty & John Vincent Scalia Home For Funerals and Cremation Service, 3377 US Highway 9, Old Bridge, New Jersey. Online condolences may be made to the family at www.HegartyScaliaFuneralHome.com

The family of Anna Marie Enriquez created this Life Tributes page to make it easy to share your memories.

Send flowers to the Enriquez family.