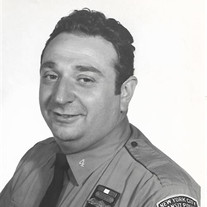 Angelo Balzano, 79 of Parlin, New Jersey went home to the Lord on Friday, October 2, 2020, he was surrounded by the love of his family. Born Sunday, November 17, 1940 in New York, New York, Angelo was the son of the late, Louis and Anna Balzano. Angelo was raised in New York City. He would go on to graduate from Charles Evan Hughes High School. Angelo would meet the love of his life, Miriam Velez at Camp Sharparoon in Upstate New York. After years of courtship[p, the couple would marry, living first in Brooklyn, and eventually settling on Staten Island to raise their children. Angelo was a Police Officer with the New York City Police Department. He was a faithful Christian. Angelo was a member of the Bethel Evangelical Free Church on Staten Island, where he served as a trustee for many years. He was an avid fan of the Brooklyn Dodgers and continued to root for the team when they moved to Los Angeles. Angelo enjoyed, going crabbing by the shore, wood working, and watching old movies. He loved to be a help to anyone in need, and around Christmas dressing up as Santa Claus for the kids. He will be deeply missed by all those that were Blessed to have him in their lives Angelo is survived by his beloved wife of 59 years, Miriam, by his loving children, Gary Balzano, and Donna Rowan and her husband Todd, by his cherished grandchildren, Gary Richard, Laura, Linda, Colleen, Joseph, and Anna, by his cherished great granddaughter Lexi, and by his sister Gloria Balzano. A gathering of family and friends will take place on Wednesday between the hours of 2:00 PM and 4:30 PM, with a service to begin at 4:30 PM at the Michael Hegarty & John Vincent Scalia Home for Funerals and Cremation Service, located at 3377 US Highway 9, Old Bridge, NJ 08857. When attending the services the family requests that you bring a written memory of Angelo for Miriam to read in the future, and if you are unable to attend please feel free to mail one to Miriam. The family requests that in lieu of flowers, donations are made in Angelo's memory to the Christian Broadcasting Network, or Samaritan's Purse. Two faith filled organizations that were special to Angelo. Online condolences may be made to the family at www.HegartyScaliaFuneralHome.com

Angelo Balzano, 79 of Parlin, New Jersey went home to the Lord on Friday, October 2, 2020, he was surrounded by the love of his family. Born Sunday, November 17, 1940 in New York, New York, Angelo was the son of the late, Louis and Anna Balzano. Angelo... View Obituary & Service Information

The family of Angelo Balzano created this Life Tributes page to make it easy to share your memories.