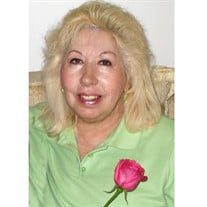 Angela Dolores Sanchirico of Old Bridge, New Jersey passed away on Tuesday, January 25, 2022, at Raritan Bay Medical Center in Old Bridge. Though she just celebrated her 85 birthday, she was taken before her time. Born on December 22, 1936 in Brooklyn, New York, Angela was the eldest of three children born to the late Charles and Elvira Granito. She is predeceased by her twin siblings, a sister, Elvira Quentin, and a brother, Charles Granito. Angela and her siblings came from humble beginnings, growing up in a house on Navy Street near the shipyards. They were raised single-handedly by their mother Elvira and though times were very tough, the love and dedication they had for each other saw them through it. Angela graduated from Prospect Heights High School and soon after took a job in banking to help support her family. Unknown to many, she was also a very talented artist, who created beautiful pastel portraits mostly of the children in her family. It would have been one of her dreams to pursue art but other duties called. In 1966, Angela married Nicholas Sanchirico and they were blessed with beautiful fraternal twin daughters, Angela and Dolores, named after their mother. Angela was deeply devoted to her children who were her pride and joy. Her life revolved around her daughters and her home in Flatbush, where they lived happily for the next 30 years. At midlife, Angela found herself single again and took a job with Bank of America on Wall Street in New York City. She worked as an Executive Assistant there until 2001. During this time she met the love of her life, Jerry Lynch, by chance one night at the first Parents Without Partners dance she went to and they have been soulmates ever since. Over the next 35 years, Jerry's big loving family became her family too. In 1998, Angela and her daughters moved to Old Bridge, NJ where she spent the remaining years of her life. Angela was affectionately called 'Aunt Snippy' by her nieces and nephews, as well as many extended family members. She enjoyed going to social dances with her partner, teaching her daughters how to cook, and keeping in touch with her family and friends over the years. Angela also loved being by the ocean and spent many happy moments with her partner, strolling down the Point Pleasant boardwalk or visiting the Cape May shore. She loved animals, especially her dear cats, Pretty, Sweetie, Simba, Lucy, Gracie, Big Boy and Mustache. She was a strong, kind and beautiful woman who will be missed by all those that were blessed to have had her as a part of their lives. Angela is survived by her loving twin daughters, Angela and Dolores, her former spouse Nicholas Sanchirico, her longtime companion Jerry Lynch, and her niece Pamela Quentin and nephew Jerry Quentin. The family will receive friends from 3:00 PM to 7:00 PM on Tuesday, February 1, 2022, at Michael Hegarty & John Vincent Scalia Home For Funerals and Cremation Service, 3377 US Highway 9, Old Bridge, New Jersey. A Funeral Mass will be at 10:30 AM on Wednesday at St Ambrose Church located at 83 Throckmorton Ln Old Bridge, New Jersey 08857. Interment will be in Holy Cross Burial Park, East Brunswick, NJ after the Church service.

Angela Dolores Sanchirico of Old Bridge, New Jersey passed away on Tuesday, January 25, 2022, at Raritan Bay Medical Center in Old Bridge. Though she just celebrated her 85 birthday, she was taken before her time. Born on December 22, 1936... View Obituary & Service Information

The family of Angela D. Sanchirico created this Life Tributes page to make it easy to share your memories.

Send flowers to the Sanchirico family.